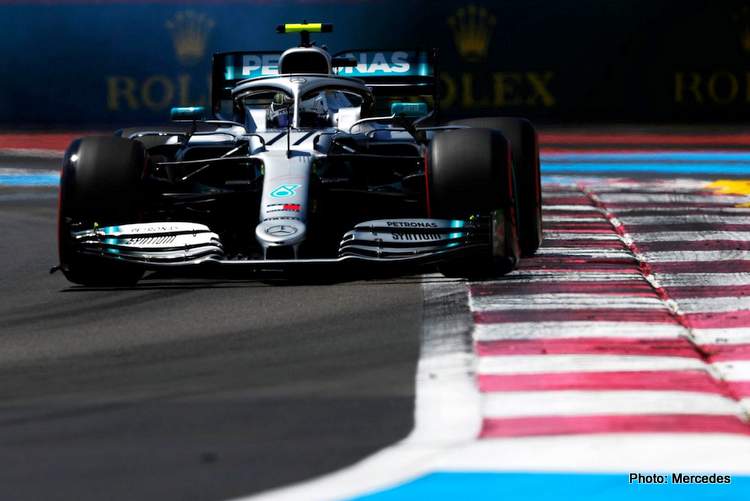 Valtteri Bottas continued to set the pace when he topped the timing screens at the end of the third and final free practice session of the French Grand Prix weekend, at the Circuit Paul Ricard in Le Castellet.

The Mercedes driver’s best lap of 1:30.159 was four-hundredths of a second faster than teammate Lewis Hamilton in second. Making it a silver clean-sweep of three free practice sessions.

Charles Leclerc was third fastest, fractionally faster than Sebastian Vettel in the sister Ferrari. Ominously the pair were four tenths shy of where they need to be to challenge their rivals and prevent another whitewash.

Vettel struggled to find the sweetspot, his discomfort in the car was highlighted when he returned to his pit garage to get his seat altered, An odd request at this point of the weekend unless someone made a boo-boo in readying the #5 car for today’s graft.

Way off the pace – 1.3 seconds down on Bottas – was Max Verstappen in the Red Bull suggesting that Honda are still lagging or perhaps (hopefully) keeping their powder dry for qualifying later in the afternoon. Pierre Gasly was less than a tenth of a second shy of his teammate.

Lando Norris was again stellar, the rookie ending the session seventh and Best of the Rest yet again. Although the teenager was almost 1.5 seconds down on the top time he was a quarter second quicker than teammate Carlos Sainz. The Spaniard good for ninth.

Daniel Ricciardo, in eighth, split the orange cars on the timesheets in his Renault and was a couple of tenths faster than teammate Nico Hulkenberg in 11th. Kimi Raikkonen rounded out the top ten in the Alfa Romeo.

Ahead of qualifying stats and common sense suggest that Bottas and Hamilton will slug it out for pole position, or put it this way it is theirs to lose and betting against them would be daft.

Simply put, Ferrari do not appear to have the package to challenge – yet we hope they are keeping it under wraps – while Red Bull suggest they do have enough to challenge the Reds, thus the stage is set for an intriguing afternoon showdown to prove or disprove this predictable assumption. 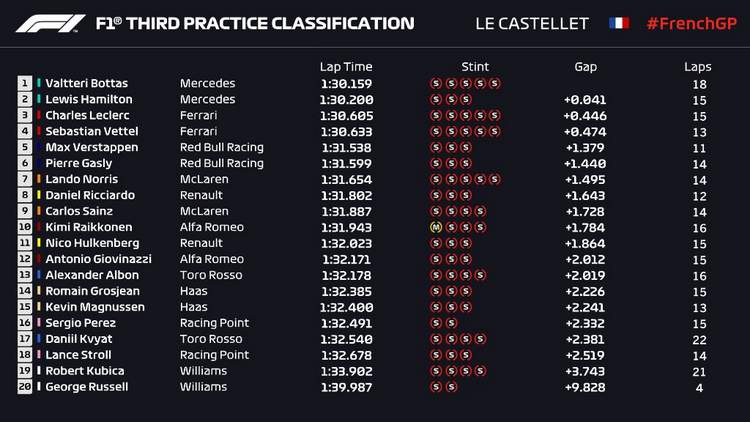