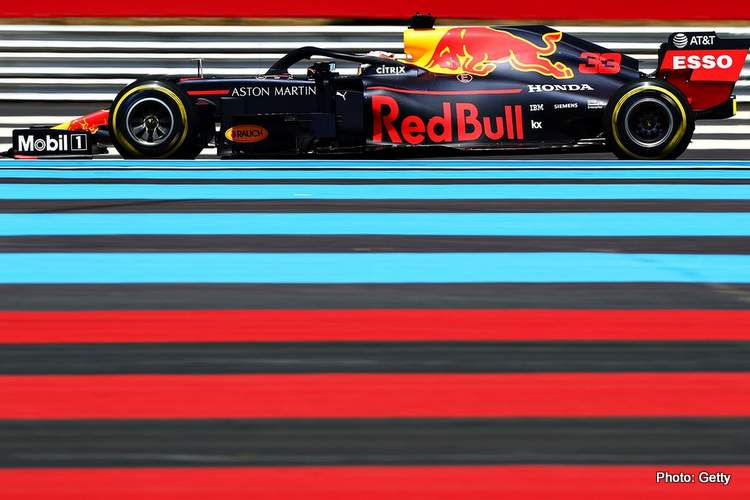 Red Bull drivers report from day one of the French Grand Prix weekend, Round 8 of the 2019 Formula 1 World Championship, at the Circuit Paul Ricard in Le Castellet.

Max: “We still have some work to do but we looked reasonably competitive against Ferrari. Mercedes are still too quick but we will look at the data and see what we can improve for tomorrow. The tyres are not that easy to predict and it seems that the softest compound is not a lot faster than the medium, which will make things quite interesting in qualifying.’

“All in all, it wasn’t a bad day and we were able to make lots of changes, especially this morning, to fine tune our set-up for the rest of the weekend.”

Pierre: “Today was good. We tested a lot of new parts on the car and now I need to sit down and analyse with the guys what worked and what didn’t. Regarding the new Honda engine, it’s difficult to say much as I’ve just come out of the car but we will look at everything tonight and push it more tomorrow.”

“The general feeling was good, the reliability was completely fine and in terms of performance, we need to see if it’s delivering what we expected. The conditions and also the tarmac made it difficult with the tyres and grip.”

“In general it’s a bit different to what we expected coming into the weekend but it’s the same for everybody. In FP1, there was less grip initially but this afternoon it seemed a bit better so let’s see if it keeps increasing like this. The soft tyres seemed to fall away so we need to see what’s best in terms of strategy and what we can do for Sunday.”

Like dropping the needle on your favourite record 🎵 Getting in the groove at the #FrenchGP 🇫🇷 #F1 pic.twitter.com/SNsMp4nLQR