Mercedes: We seem to have a decent car to work with 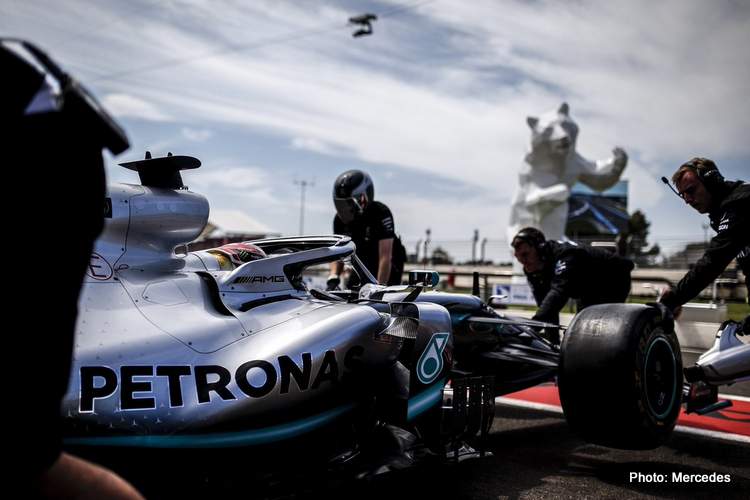 Mercedes report from day one of the French Grand Prix weekend, Round 8 of the 2019 Formula 1 World Championship, at the Circuit Paul Ricard in Le Castellet.

Valtteri Bottas: “It was not easy in the beginning; everyone struggled in the morning because the track was much more slippery than usual. But the track ramped up quickly, I could feel big gains on a lap-by-lap basis, especially in the corners. The more the track improved, the better the balance of the car felt.”

“Despite the balance issues, the car was quick out of the box which is always a good start. We’ve made good changes between the sessions and I felt much more comfortable in FP2, which is why the lap time was better.”

“It’s really warm out there, and it will only get warmer, so tyres are going to be on the limit, especially on Sunday. We still struggle with the balance over the course of the entire lap, so we’ll have a good look at the data tonight to see what we can improve for tomorrow.

Lewis Hamilton: “It’s been very hot today, but we got through most of the programme. It’s been a bit difficult with the balance of the car; maybe that’s to do with the new tarmac they have here and the high temperatures, I think the track reached 55 to 60 degrees today.”

“In general, the car pace is really good, we just have to fine-tune the balance. I didn’t do a very good FP2 lap, I had a big snap into Turn 3 which I thought was a good catch, but ultimately I had a small issue with the Power Unit afterwards and had to come to the garage. Otherwise it’s been a smooth day with no major problems.

Andrew Shovlin: “It’s been an interesting day from the point of view of the tyres and the car performance. All the cornering regions of the circuit have been recently resurfaced and it was clear that the Soft tyre was suffering quite badly on the new tarmac.”

“Our pace looked pretty good, but the balance was really messy due to poor grip from the rear tyres. We made some changes over the break to help calm the car down and both drivers felt it was better in the afternoon.”

“Valtteri had a clean session, his pace on low fuel was good and the long run was consistent. Lewis was finding it a bit harder to get the balance of the car in the right place and he made a mistake on his Soft tyre run. We would have continued on that tyre, but we detected a misfire shortly after and brought the car in to investigate.”

“We were able to get back out to do some long run work after fixing the issue and the car looked to be working well for Lewis on race fuel. We have a bit of work to do tonight to see if we can further improve the rear end, but we seem to have a decent car to work with. So, overall we are quite happy.”

UPDATE: The boys in the garage detected a misfire on Lewis’ car after the spin. The car was checked for damage and all was resolved. LH back out now and still in P2! 👌#FrenchGP pic.twitter.com/TuCxKdJi6Y