Binotto: As Ferrari we are all very unhappy and disappointed 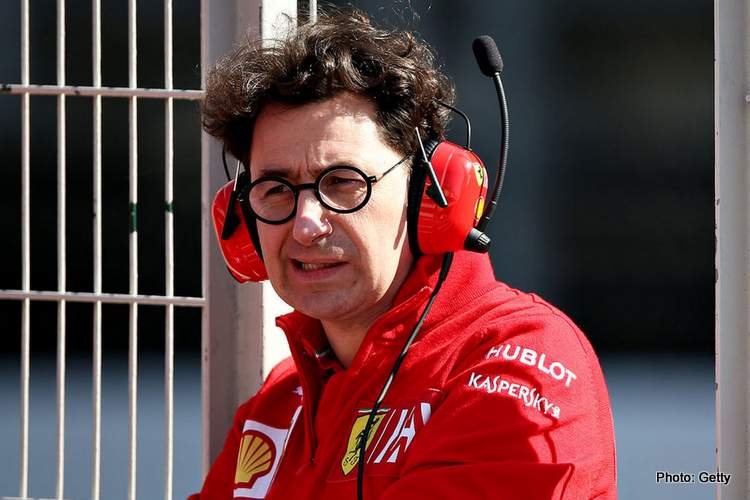 After a request to review the time penalty given against Sebastian Vettel during the Canadian Grand Prix got thrown out, dejected Ferrari team principal Mattia Binotto expressed how “very unhappy and disappointed” he was by the decision.

Vettel looked on course to win the race in Montreal two weeks ago, but he finished second after incurring a five-second time penalty for an incident with Lewis Hamilton some 20 laps from the end. Instead, Hamilton was awarded the win after stewards ruled Vettel broke the rules.

“As Ferrari we are all very unhappy and disappointed. We are disappointed, certainly for Ferrari, but we are disappointed for the fans and for our sport,” Binotto said at the French Grand Prix in the Ferrari motorhome on Friday. “We do not intend to comment any further.”

With Hamilton pressuring behind him, Vettel went off into the grass heading into a turn and then swerved back onto the track, forcing Hamilton to brake his Mercedes suddenly.

Earlier, Ferrari sporting director Laurent Mekies attended the hearing at the French GP, along with three of the four Canadian GP race-day stewards, with another steward appearing by videoconference.

Although Ferrari was confident it had new elements to strengthen its case for a review, and an eventual overturning of the decision, governing body FIA decided otherwise.

“There are no significant and relevant new elements which were unavailable to the parties at the time,” the FIA said in a statement.

Ferrari presented analysis of telemetry data of Vettel’s car; a video analysis of different camera views; GPS racing line data, and Vettel’s witness statement. But FIA said the same elements had already been available at the time, and thus offered nothing new.

A video analysis by a driver representing broadcaster Sky Sports was deemed a new element but “not significant and relevant,” as was a video of Vettel’s face camera during the incident which contained footage already visible on “other available video” footage.

Speaking shortly before the hearing, Mekies said “we believe this evidence is quite overwhelming when it comes to establishing Sebastian did not breach any regulations.”

Binotto refused to comment further when directly asked to comment about the disparity between the team’s own “overwhelming” evidence and the FIA’s decision to ignore it.

Ferrari felt the penalty deprived Vettel of a 53rd career win. He let his feelings be known by swapping the No. 1 and No. 2 signs in front of the cars parked on the post-race grid to signify he was the moral winner.

“It was a cold shower for us when the decision was taken,” Mekies told broadcaster Canal Plus in separate comments.

Ferrari’s protest did not convince FIA and it means Ferrari has not won since former driver Kimi Raikkonen’s triumph at the United States GP last October. Meanwhile, Vettel is 15 races without a win since the Belgian GP last August.

Ferrari lagged behind Mercedes in practice for the French GP on Friday, however, with Mercedes 1-2 in both sessions.

Team Principal Mattia Binotto on today’s FIA decision following the #CanadianGP: “There’s no doubt everyone at #Ferrari is unhappy and disappointed, not only for the team but also for the fans and for our sport”.