Ferrari: In France we will have a few small evolutions 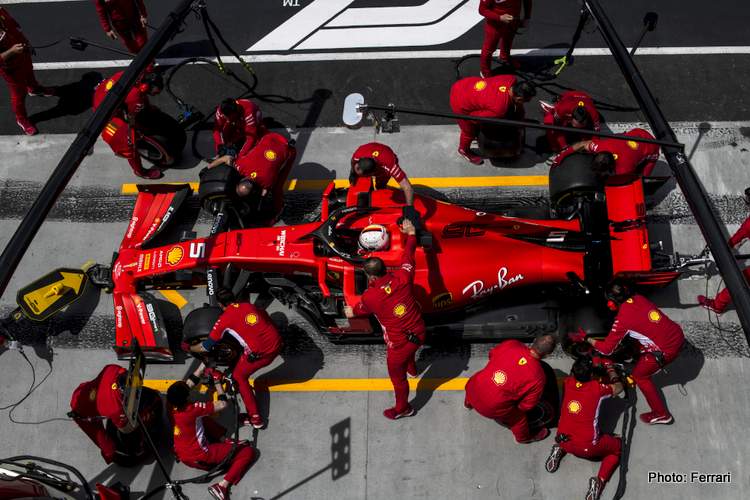 The 60th French Grand Prix to count towards the Formula 1 World Championship takes place this weekend at the Paul Ricard circuit near the commune of Le Castellet in the south of France.

It is the eighth round of this season and the 16th time the circuit has hosted the race. The French Grand Prix dates back to the earliest days of motorsport and the very first Grand Prix motor race was the 1906 French Grand Prix.

The name of the race, “Grand Prix” translating as “Big Prize” proved to be true as the winner was presented with 45,000 Francs, equal to approximately 13 kilos of gold. This race has been held at seven different venues and Scuderia Ferrari has won it 17 times.

Reims and Rouen. In 1950, the first year of the world championship, the French round was held at Reims, but the Scuderia’s first win came when the race had moved to Rouen in 1952. Alberto Ascari did the honours at the wheel of a 500.

The following year, the Maranello marque duly won at Reims, with Englishman Mike Hawthorn taking his first win. There were four more victories at Reims, Peter Collins (1956), Hawthorn again (1958), Tony Brooks (1960) and Giancarlo Baghetti who amazingly took an incredible win in the 156F1 on his debut in the category in 1961.

The very last win for Ferrari at this track came in 1968, courtesy of Jacky Ickx.

Le Castellet. The Paul Ricard circuit first hosted the French Grand Prix in 1971, but Scuderia Ferrari had to wait for its first victory in the hills of the Var region until 1975, when Niki Lauda did the honours. Today, the track offers no fewer than 167 different configurations.

Its most famous feature is the very long Mistral straight and the extremely high speed and challenging Signes corner: in the old days, journalists would spectate from there to listen out and decide which drivers were taking it flat out.

In 1990. Scuderia Ferrari’s second win at Le Castellet came in 1990, with Alain Prost giving the Maranello team its one-hundredth Formula 1 victory. The French Grand Prix had been absent from the calendar since 2008, when it returned at Le Castellet last year.

At Magny-Cours. From 1991, the race moved from the south coast to the very centre of the country, at Magny-Cours.

Timetable. The cars will take to the Paul Ricard circuit for the first time on Friday at 11 o’clock for the first free practice session, with the second one scheduled for 3pm. The final hour of preparation comes on Saturday at noon, while qualifying gets underway at 3pm. The French Grand Prix starts at 3.10om on Sunday 23 June.

Charles Leclerc: “France – it’s a pretty new track to me, strangely, as it is very close to my home. I have some great memories from last year’s event which was the first time that I was there. It was also the first time that I made it to Q3 in Formula 1, which is something that I will never forget.

“The track is quite atypical, with huge run-off areas. You can really push the limits in free practice without taking actual risks because the walls are quite far away. I really enjoy driving at Le Castellet and look forward to being back there.”

Sebastian Vettel: “Last year’s French Grand Prix was our first at the Circuit Paul Ricard for many years, so returning this year we have more data to work with. The circuit has long straights and low-speed corners, although there is a wider range of corner speeds there. Most of the corners have been resurfaced since last year.

“We have a one step harder tyre selection than in Montreal and it is likely to be another one-stop race. The weather can be unpredictable here and is often very hot and windy.
Last year our race was compromised by the first lap incident but I think our car can have the pace to do quite well there.”

Mattia Binotto, Team Principal: “Following Canada we definitely want to get back on track and go racing with our rivals once again. In France we will have a few small evolutions, elements that represent for us a useful step in defining the direction we will take in developing the car.

“What we will be bringing won’t be the solution to our problems, but the technical feedback we get from these evolutions will be important for the next steps we take.

“Paul Ricard has been a tricky circuit for us last year and we know that this kind of track isn’t particularly favourable for our package, but nothing is impossible so we will be ready to do our best.”