F1 Penalties: A regular distraction over the years 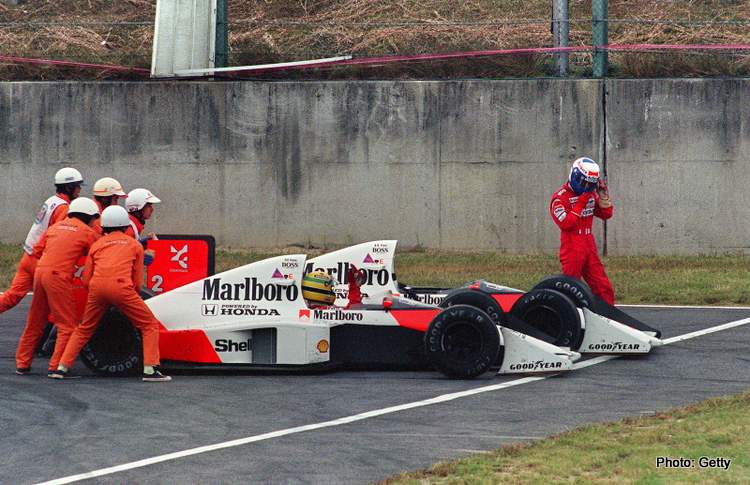 The last one took place in Canada, causing Vettel to lose the Grand Prix, but in the past it was the turn of other champions: Senna and Prost, Rosberg and Hamilton

With the 2019 Formula 1 championship a third of the way through, the resounding seven out of seven score from Mercedes since the Australian Grand Prix has seen only one small blip. That blip is coloured red, because at the Canadian Grand Prix on June 9, Mercedes didn’t quite have it all their own way.

Instead it was Sebastian Vettel in front from start to finish – until he made a crucial mistake. Towards the end of the race, his Ferrari went straight over the right-left chicane around halfway through the lap, flew over the grass at 200kph, and somehow managed not to spin.

Then Vettel fought his way back onto the track, ending up right in front of Lewis Hamilton, who had been following him closely lap after lap. That day, the Mercedes driver knew that the Ferrari was just a bit too quick for him, so he could only wait for its driver to make a mistake.

The rest is history. The stewards looked into the incident, and a five-second penalty was handed down swiftly to Vettel. The race finished with the Ferrari ahead of Hamilton, but only as far as spectators and television were concerned.

The official timing showed them in the opposite order. Then there was the well-publicised aftermath: a furious Vettel refused to go to parc ferme, instead heading to Ferrari’s hospitality.

When he finally made it to the podium – under threat of greater punishment – he stopped first at the deserted parc ferme and swapped round the finishing numbers between Hamilton’s car and the only Ferrari that was parked there, belonging to Charles Leclerc, who had finished third. According to Vettel’s classification, the order was Ferrari 1, Mercedes 2.

As a grim-faced Vettel finally stepped onto the podium, controversy raged in his wake: did he really need to be penalised? Wouldn’t it have been better to have left a racing incident unpunished, which would have been absolutely tolerated back in the old days? More than a few people felt a tug of nostalgia for that less complicated era…

Yet what happened at the Canadian Grand Prix is actually a perennial debate in sport as a whole: was it a penalty or not? Did he do it on purpose or by accident? There’s plenty of material there for endless bar stool debates, but this is nothing new in a sport that’s been characterised by penalties, investigations and tribunal hearings since time immemorial.

Who could fail to recall, for example, the clash between Senna and Prost in the closing stages of the 1989 Japanese Grand Prix? Both had been battling for the title throughout the season, in a duel embittered by personal vendetta and mutual suspicion.

After they clashed at the chicane before the Suzuka pit straight, Prost jumped out of his stricken car while Senna got going again, en route to a fightback that would culminate in victory and what he thought was another title. But the sporting powers-that-be would deny him. Senna was penalised for an illegal re-start, his victory was disallowed, and Prost became champion.

The feud would last for another whole season: at the 1990 Japanese Grand Prix, Senna drove into Prost (who was by then driving for Ferrari) at the first corner. The title race was over and Senna was champion, despite having to explain himself to the sporting authorities, who even threatened not to renew his racing licence for the following year.

And more recently: Spain 2016. The two dominant Mercedes got underway from the front row and Rosberg was ahead of Hamilton into the first corner. Less than a kilometre later, Hamilton mounted a blind attack; his teammate put him onto the grass and this set in motion a chain of events that eliminated both cars.

In this case, the investigation took place internally, behind closed doors. Toto Wolff and Niki Lauda spoke to both drivers, who each said their piece. But Lauda had some clear ideas already: two Mercedes retired, and that was clearly somebody’s fault. That somebody, according to Lauda, was Hamilton: he should have waited a bit longer rather than just go charging after his teammate like there was no tomorrow.

There was no formal punishment handed out, but Lewis would eventually pay the price by losing the championship to Rosberg by just five points at the end of the year. If he had just hung on for a few more corners in Spain before attacking and passing his teammate – as he probably would have been able to do – then the title could have been his.

Vettel Penalty: Who said what?