Pagenaud: An honor to be recognized at the Whitehouse 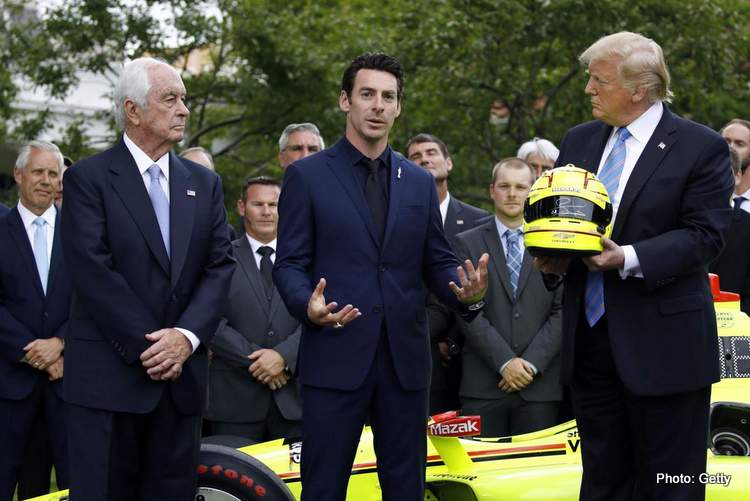 Indy 500 winner Simon Pagenaud has been living in the United States long enough to know that in a time of revved-up partisanship, an invitation to the White House might come with some speed bumps.

Decline an invite, as some American athletes have, and you might risk being seen as a grandstander who’s dragging personal politics into the sports world. Accept and others might see you as tacitly endorsing a laundry list of policies and views. A version of this debate played out in Pagenaud’s Twitter mentions earlier this week.

But Pagenaud, a native of France, didn’t hesitate to accept President Donald Trump’s invitation to attend a White House ceremony with Team Penske on Monday to celebrate their Indianapolis 500 victory.

“To me, when the president of the biggest country in the world invites you to reward you for sports achievements, I think all politics aside, you say yes,” Pagenaud said.

And soon, he may get to do the same thing with President Emmanuel Macron.

Pagenaud goes out of his way to note that it was an honor to be at the White House “as a Frenchman.” But he has lived in the U.S. since the mid-2000s, and it’s clear that his affinity for his adopted country is strong — so strong, in fact, that he will consider applying for dual citizenship after he marries his American fiancée, Hailey McDermott.

“It’s a difficult subject for me because I still feel like my French roots are very strong,” he said. “But in the meantime, America has welcomed me with such open arms that I feel Americanized.”

“And when you read articles or you hear people talk about me everywhere in France, they say I’m Americanized — they say I’m the ‘French American.’ I’ve adopted your culture so much. My future wife is American, she’s from San Diego. I talk English 80 percent of the time. And my way of thinking is more American than French now. So I am Americanized. I can’t deny it.”

The couple is not entirely disassociated from politics; during qualifying at Indianapolis in May, McDermott and Ashley Welch, the fiancée of Pagenaud’s Penske teammate Josef Newgarden, wore T-shirts that said, “Not YOUR Body, Not YOUR Choice,” a statement about abortion policy.

She posted a photo of the team from the White House on her Instagram account, writing, “Today we got to meet the POTUS @realdonaldtrump and regardless of political views, it was an honour to be recognized at the @whitehouse.”

For his part, Pagenaud said he enjoyed meeting Trump, whom the team presented with a souvenir racing helmet, “He was very down to Earth. Very easy to talk to.”

Pagenaud appreciated his tours of the Capitol and the White House, where he was particularly impressed by the art, décor and some behind-the-scenes access.

“Rooms where you can’t take your cellphone, so I can’t describe that too much,” Pagenaud said. “That was just, honestly, incredible to experience that, and it’s something that I’ll always have engraved in my memory.”

Pagenaud has only been home for two nights since winning Indy — and that includes just a few hours on Monday night, before flying to Milwaukee for a media tour to promote next weekend’s race at Road America. He’s still ploughing through responses to the 2,500-plus messages he received since his Indy win.

He doesn’t appear to be running on fumes. Asked to name his favourite moment since winning Indy, he quickly decides that it was pouring milk on himself in victory lane and then proceeds to rattle off four or five more things that he thought were really cool.