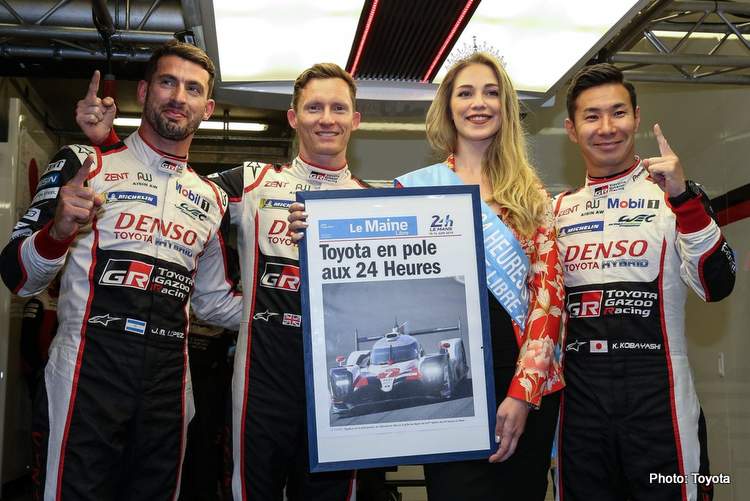 Ex-Formula 1 driver Kamui Kobayashi set the fastest time after clocking 3:15.497 in Q2, his second pole at the 24 Hours of Le Mans.

Despite both Rebellion Racing cars suffering engine problems during qualifying which limited their time on track, the #3 Rebellion R13 – Gibson still placed fourth. Indeed, only 1.310s separate the top six LMP1 cars at the end of all three qualifying sessions.

LMP2 was equally competitive with just 0.594s separating the top three cars. The #39 Graff entry narrowly clinched pole over the #28 TDS Racing Oreca 07 – Gibson car with Loïc Duval posting a time of 3:25.345 for the WEC entry in the third and final qualifying session.

The #11 DragonSpeed Oreca 07 – Gibson had proved quickest during Q1 and Q2 but was unable to keep up the pace for Q3. The #36 Signatech Alpine Matmut – which is challenging Jackie Chan DC Racing for the LMP2 title this weekend – was third out of the WEC entries.

The third qualifying session saw plenty of changes in the overall LMGTE Pro times as Aston Martin Racing set an overall best of 3:48.00 which awarded them pole. The time was set by the #95 car with Marco Sørensen at the wheel and made even more special considering this weekend marks Aston Martin’s 60th anniversary of the marque’s 1959 Le Mans victory.

Meanwhile, in LMGTE Am, it was a Porsche 1-2-3 with Dempsey-Proton Racing’s #88 and #77 Porsche 911 RSR cars dominating qualifying after finishing first and second – Matteo Cairoli setting the pace in the No.88 for his second consecutive pole. The No. 86 Gulf Racing was third quickest in a similar car making it a hugely successful Le Mans qualifying for the German marque.

Friday will be a day of rest for the drivers before the 87th running of the 24 Hours of Le Mans gets underway at 15h00 CEST on Saturday 15 June.

A total of 61 cars will start this year’s race after the #99 Dempsey-Proton Racing car was withdrawn following a heavy impact with the barriers during yesterday’s qualifying.