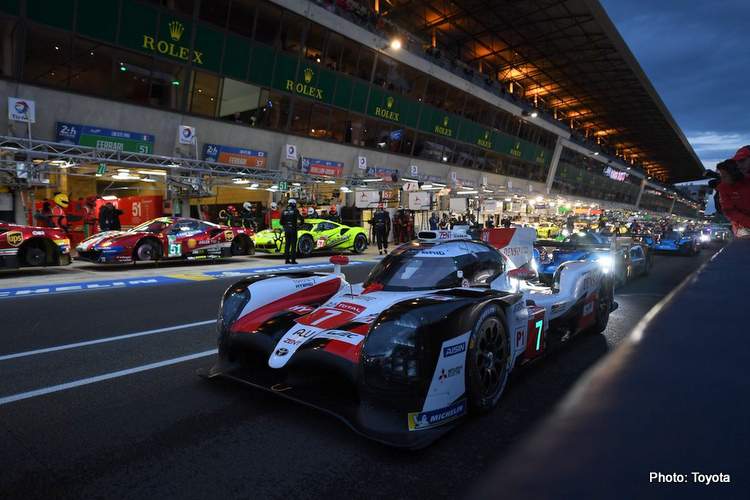 Toyota Gazoo Racing clocked the fastest time during the first 24 Hours of Le Mans qualifying session with a time of 3:17.161 in the #7 TS050 Hybrid with Kamui Kobayashi at the wheel.

With just 45 minutes left on the clock, there was on-track drama between the #31 DragonSpeed car and the #7 Toyota driven by Mike Conway when the former stopped on the Ford chicane and the Toyota collided with the stationary car.

The damage incurred saw the cars return to the pits for repairs and miraculously both teams were to make it back on track before the session ended.

Despite the incident, DragonSpeed was the fastest LMP2 car in Qualifying with a time of 3:26.852, just 0.131s ahead of the #36 Signatech Alpine Matmut Alpine A470 Gibson. American squad United Autosports – who is confirmed to join the FIA WEC for the 2019/2020 season – was third fastest.

Ford pip Aston Martin to the post in LMGTE Pro, just 1.32s separated the top eight cars in the class at the end of tonight’s Qualifying session but it was Harry Tincknell in the #67 Ford Chip Ganassi Team UK that pipped Aston Martin Racing’s Alex Lynn to the post in the session’s closing stages with a time of 3:49.530.

Lynn led the field for the majority of Q1 but the hugely competitive nature of the LMGTE Pro category eventually saw the #91 Aston Martin Vantage AMR drop to third, 0.062s ahead of the No.91 Porsche 911 RSR belonging to the Porsche GT Team.

The second Qualifying session will get underway tomorrow at 19h00, followed by the third and final one at 22h00.

Click HERE to view all the latest times and results.

👀The first qualifying session is over, here are the first cars is each class. @Toyota_Hybrid, @DragonSpeedLLC,@FordPerformance
and @GoDempseyRacing take the provisional pole in each class.