Hamilton: I would have tried to squeeze it like Vettel did 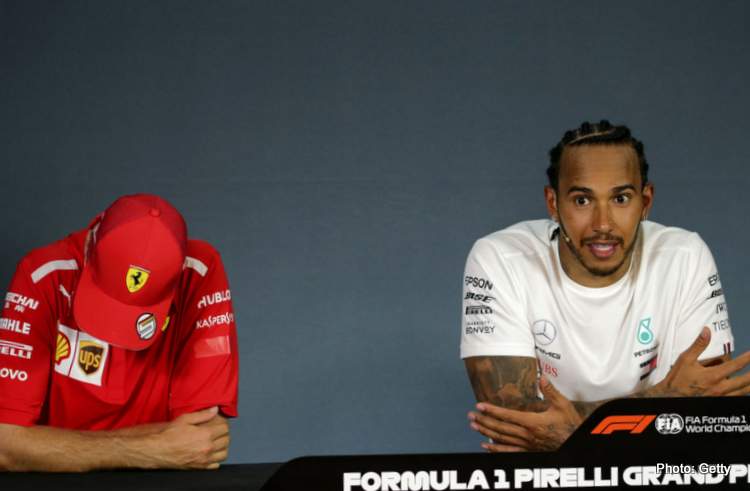 If you have raced or know racing then it is no secret. What Sebastian Vettel did, to preserve his lead after making an error while leading the Canadian Grand Prix, is part of the ‘dark art’ of racing and now his archrival Lewis Hamilton admits he might have done the same thing.

From karting to Formula 1 it works like this: driver leads the race and is chased hard by a rival, leader makes a mistake, instinct forces him to do anything (at his own peril at times) to first keep the car straight without losing speed and then do whatever it takes to not concede the lead, even if it means stumbling on to the racing line to block those in pursuit.

It happened on Sunday. Vettel leading, under relentless pressure from Hamilton, first was small mistake number one when he missed his braking into the hairpin allowing Hamilton into DRS range.

The Merc sniffed a crack and tucked under the wing of the Ferrari the gap as they crossed the finish line a tad over half a second, then as they roared into Turn 3, the #5 red car got loose and the rest is well-documented in much-replayed footage of the incident.

Vettel then made the second mistake, a more costly one, and was forced to employ every trick in the book to stay ahead, namely keeping his foot flat as he skipped over the grass and then ‘tripping up’ into the path of the Mercedes. Arguably the oldest tricks in the book.

Hamilton said as much a day after, “I watched the slow motion, it’s obviously very tight, what I can say is that if I was a leader and I made a mistake and went off, I probably would have done the same thing.”

“It’s happening so fast, and you’re just trying to keep the position, and when I say I would have done the same thing, I would have tried to squeeze it too. In the end, that’s what happened today. So, my opinion on that has not changed.”

“And as for the rules, let’s say we do not have this rule, I would not have slowed down, and we would have had an accident, one way or another it was going to end badly.”

Replays show Hamilton had to step on the brakes to avoid the wayward Ferrari, “Usually, the first instinct is often the right one, I would say, when I watched the slow motion and looked at my data, I had to brake at the exit of Turn 4.”

“There was a danger, and if I had not done it, we would have got hurt, my opinion is not different on this subject. The thing is, from a pilot’s point of view, you know how it’s going, it’s different when you’re watching as a spectator, but as a driver, things go wrong and you think: shit.”

“You try to squeeze in order not to lose a position, it’s a natural instinct we have, we’re not going to say: Actually, I’m going to put myself on the left and let them pass. Unfortunately, he went off track and the way the rules are written, that’s how it’s prescribed,” added Hamilton.

The “if-I-go-out-I’m-gonna-take-as-many-as-I can-with-me” is a new attitude modern racing drivers have at all levels. The sport is so safe these days a driver can afford to do that kind of thing. In the sixties or seventies, they would be killed. Today they don’t even get hurt… until they do.

Add to that the fact that whoever has been involved with racing drivers and motorcycle riders, will tell you the most common excuse from racers after a ‘grey area altercations’ is invariably: “Where was I supposed to go?” And of ciourse, they are never wrong, even when they are.

This was the defence Vettel was forced to embrace to disguise yet another brutal error that cost him a race he should have won. But real racers, like Hamilton and many who follow the sport, know that what Seb did is what you do, it’s a racer’s instinct.