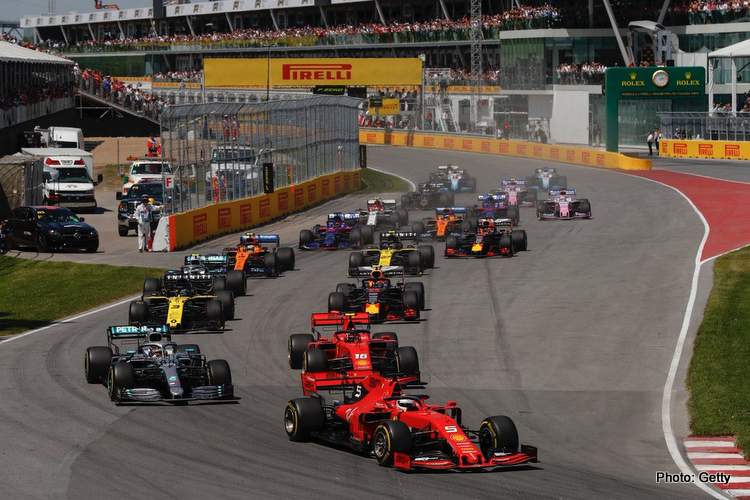 Formula 1 Managing Director, Motorsport Ross Brawn provides insight into how he saw the controversial Canadian Grand Prix from his perch at the helm of the sport, sharing his views on ‘that penalty’ as well as other highlights that caught his eye on race day in Montreal.

Once again this year, the race in Montréal can claim to have been one of the most spectacular of the season, and it wasn’t just down to the efforts of Lewis Hamilton and Sebastian Vettel who treated us to a great tussle starting with a thrilling qualifying battle on Saturday and then a truly edge-of-the-seat battle on Sunday.

The large crowd of 307,000 from Thursday to Sunday did their bit too, at the Circuit Gilles Villeneuve and in the city centre, creating a unique atmosphere, which is always a feature of this event. Thanks too, to race promoter François Dumontier, the city of Montréal and the state government of Quebec, and all those who worked so hard to build a really practical and state-of-the-art pit complex in record time.

Thanks too to all of the staff at the circuit and the volunteers who help make the race happen. If this race is one of the most popular with the teams, it’s down to the people who work at the track.

Sebastian was the star of the weekend

Without taking anything away from Lewis Hamilton, whose name now appears on the Canadian winner’s trophy seven times, Sebastian Vettel was the star of the weekend.

The Ferrari drivers produced a brilliant pole lap after a fantastic duel with his main rival. On Sunday, he got off the line well, comfortably controlled the first stint on mediums tyres, but then seemed to suffer when both he and Hamilton moved to a hard compound that seemed to suit the Mercedes better on the day.

Then, on lap 48, he made his only mistake of the weekend. He was given a five-second penalty that cost him the win, as although Hamilton didn’t seem to have the top speed to get past him on the straights, the German was unable to create a big enough gap to erase the time penalty.

I can understand the disappointment and frustration Vettel felt (and that he is surely still feeling), as he feels he was robbed of a deserved win. The most important thing from the weekend, though, is that the fans saw a vintage Vettel performance, which has perhaps been absent since last year’s Belgian Grand Prix.

Ferrari was in fine form in Montréal, so it was essential that they could count on a driver of the class and talent of Sebastian being at the top of his game, and that was the case this weekend.

The penalty the Stewards handed out to Sebastian in Canada has got everyone talking, fans and F1 folk alike.

As mentioned, I can understand how Vettel feels and I know Ferrari intends to appeal the decision. I also know what a difficult job the stewards have, as they have to reach a their decision in a very short time, producing a verdict that can affect the outcome of the race.

As such, I don’t want to give an opinion on the decision, because in my position it would be wrong to do so.

I have a lot of respect for the work of the stewards and for their professionalism and I believe they would be the first to say that they would prefer not to see a race outcome decided via a penalty.

At the same time, I understand how difficult it must be for fans to understand why the driver on the top step of the podium is not the one who crossed the finish line first. That’s why transparency is important when it comes to explaining the decisions of the Stewards, especially in such a complex sport as Formula 1.

It is in football, where despite the arrival of VAR, there is still discussion as to whether a handball should be punished with a penalty or not.

Therefore, it might be useful to work with the FIA on solutions that would allow the stewards to explain their decisions to the fans and to elaborate on how they reached them.

Having said that, I would emphatically add is that there is nothing sinister about a decision like this. You might agree with it or not, but none of those who take on the role of steward each weekend has a hidden agenda and fans can be certain of that.

Montréal was the Renault team’s best weekend of the year. Both the works cars and both Renault-powered McLarens made it Q3, with Daniel Ricciardo being the best placed in fourth spot on the grid.

On Sunday they had two drivers in the points. After a tough time, it seems there is light at the end of the tunnel for the French marque, although there is still a significant gap in performance terms to the top three teams.

Ricciardo eventually finished in sixth place, with Hulkenberg seventh, but they were both lapped. Formula 1 needs the teams to be more closely matched – something we are working on as we head into the final stages of producing regulations for 2021 and beyond – but in the meantime it’s great to see that a prestigious manufacturer squad such as Renault is beginning to see some reward for all its effort.

Ricciardo’s fourth place in qualifying is definitely a good sign, and a good race performance from the Australian – in which he treated us to a great but all too brief battle with Mercedes’ Valtteri Bottas – and from his German team-mate are evidence that Renault may be bouncing back.

We now head to the team’s home race at Paul Ricard, which will surely give them even more motivation.

Lance shines in a race of attrition

If ever there was evidence that a home event provides a boost, you need look no further than Lance Stroll’s weekend at the Circuit Gilles Villeneuve.

The Canadian youngster took a great ninth place, a result you would not have bet on given his travails earlier in the weekend. On Saturday morning, Lance didn’t even post a lap time in FP3 after his latest spec Mercedes power unit went up in smoke after a few kilometres.

He was thus forced to revert to an older specification PU that was coming towards the end of its mileage limit. After failing to make the cut at the end of Q1, this time joined by his team-mate Perez, even his most ardent fans wouldn’t have held out much hope of seeing him finish in the points.

But Lance did a great job of managing a long 45-lap first stint on hard compound tyres, before pushing hard to the flag on mediums. His two points for ninth were an excellent reward at the end of a difficult weekend and they’ll surely act as a confidence booster for the rest of the season.