Binotto: Seb could not have done anything different 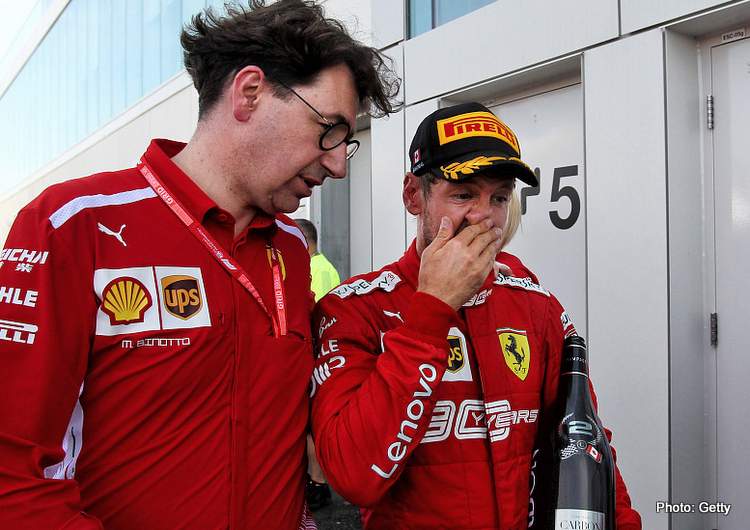 In the wake of the controversial 2019 Canadian Grand Prix, the Formula 1 world is split over the penalty dished out during the race that ultimately robbed Ferrari and Sebastian Vettel of victory, spoilt what could have been a cracking final 20 laps and handed Lewis Hamilton maximum points which were not his for the taking, or so it was thought.

Naturally, Ferrari are backing their errant driver as they have done in the past, with team principal Mattia Binotto ordering his team to lodge an intent to appeal.

After the race in Montreal, the team boss told Italian journos, “It is not for us to make these decisions. There are people in charge of taking measures of which we can only take note.”

“But as you can imagine, we do not agree with the decisions taken. For us, Seb could not have done anything different to what he did. For this reason, we have decided to appeal the decision of the stewards.”

The appeal needs to be handed in by Thursday (this week) after which it will go through the FIA processes and protocols which could take weeks, if not months before the TBC asterisk is removed from the results sheet of the 2019 Canadian Grand Prix.

The question raging in the spotlight is whether Vettel indeed did return on to the track dangerously or not? The stewards ruled: danger. Five-seconds penalty.

Amid the hullabaloo in the aftermath of an unpopular, albeit correct penalty, and Vettel’s subsequent post-race conniption there may be a tendency to forget that he brought it all upon himself as he buckled under pressure twice during that crucial phase of the race.

First, he went too hot and wide into the hairpin on lap 47 allowing Hamilton, now DRS range, to close him down to about six-tenths of a second.

Less than half a lap later still with the Mercedes large in his morros, the German made the game-changing error exiting Turn 3. After stewards had reviewed the incident, the penalty followed a few laps later – cue a frenzy of online debate and discussion.

Heated sentiments have split the sport into three camps:

Naturally, opinions have napalmed across the spectrum with even F1 world champions – Mario Andretti, Nigel Mansell, Nico Rosberg – weighing in on this animated debate. Some, on one end, slamming officialdom while their peers, on the other end, quote the cliche: rules are rules.

Of course, Ferrari are aggrieved and Binotto explained why, “I think Seb was lucky to stay on the track and I didn’t see any [malicious] intent in what he did. To me it was quite simple, he was leading the race and tried to maintain his position. We do not agree with the decision of the sports commissioners.”

Fans agreed and vented their anger and disenchantment about how things panned out by booing the podium ceremony, a chorus that was undoubtedly joined by a large sector of the F1 fanbase, neutrals or not, who witnessed the race-killing process live on TV or stream.

“I think many people were disappointed by the incident. In the past, there have been similar situations which have not been judged in the same way. And so I don’t think the right decision was made,” concluded Binotto.

With the dust slowly settling on what was an intriguing weekend at Circuit Gilles Villeneuve, emerging through the haze is the sobering reality that Ferrari – and their star German driver – again lost a race that was theirs to win.

Big Question: Could Seb have done anything differently?