Vettel: Where am I supposed to go? 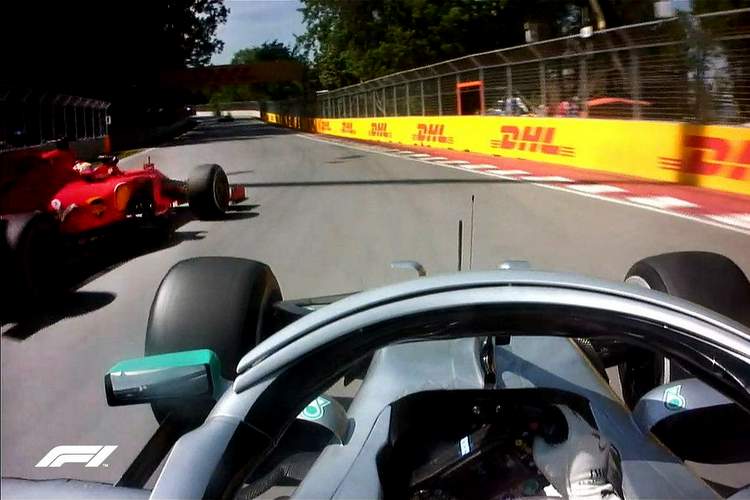 Defending Formula 1 World Champion Lewis Hamilton won the Canadian Grand Prix on Sunday to extend his overall lead after Ferrari driver Sebastian Vettel committed yet another error under pressure which ultimately cost him his first victory in ten months.

It was Hamilton’s fifth victory in seven races and 78th overall for the five-time F1 champion. His seventh win in Canada moved him level all-time with Michael Schumacher.

Vettel’s car crossed the line first but Hamilton won after a time penalty was imposed on Vettel. The German driver reacted angrily after the race, including replacing a No. 1 sign in front of Hamilton’s car with a No. 2 sign.

“Obviously I’m angry, as you can imagine,” Vettel said. “I gave everything I had today and more.”

Vettel finished in second place with teammate Charles Leclerc third ahead of Mercedes driver Valtteri Bottas, who secured a bonus point for the fastest lap.

In the standings, Hamilton is 29 points clear of Bottas and already 62 ahead of Vettel heading into the French Grand Prix in two weeks’ time.

Vettel was leading the race from pole position with a little more than 20 laps remaining. But with Hamilton closing in, Vettel veered onto the grass before swerving back onto the track and forcing Hamilton to slam on his brakes.

An exasperated Vettel said on team radio “they’re stealing this race from us” — and it clearly festered for the remaining laps — but it was another blunder from the four-time F1 champion following multiple mistakes in losing the past two championships to Hamilton.

Vettel could not contain his anger at the decision taken by governing body FIA’s stewards. He felt he had no choice but to momentarily go off track.

“Where am I supposed to go?” Vettel said. “This is a wrong world, this is not fair.”

With his helmet still on, Vettel walked out of his car and did not stop for post-race interviews, instead marching to the Ferrari garage, perhaps to cool down, and then marching back. But he was anything but calm upon his return.

The crowd cheered him, perhaps thinking he had claimed a symbolic victory.

Hamilton conceded “that’s not the way I wanted to win, I would’ve got past” if not for the incident.

Vettel’s barren streak is now 15 races, dating back to the Belgian GP last August, while Hamilton is well poised in his bid for a sixth F1 title to move within one of Schumacher’s all-time record.

As they climbed on the podium, Hamilton showed a touch of class by grabbing Vettel’s arm and pulling him alongside him on the top step.

The reigning World champion was asked for his view and some of the crowd jeered him after he said “all I can say is I didn’t make the decision.”

Vettel was an impeccable sportsman and a big man when he immediately intervened and told the crowd not to boo Hamilton, but to jeer the stewards’ decision itself.

Earlier in the race, Vettel had started well, getting away cleanly from pole as Hamilton held off Leclerc heading into the first two turns.

But Mercedes has now clinched seven straight wins this season and Ferrari has not won since former driver Kimi Raikkonen’s victory at the United States Grand Prix in October last year.

Rivals on track ⚔️
Respect off it 🤝