Toro Rosso: The maximum we were able to achieve 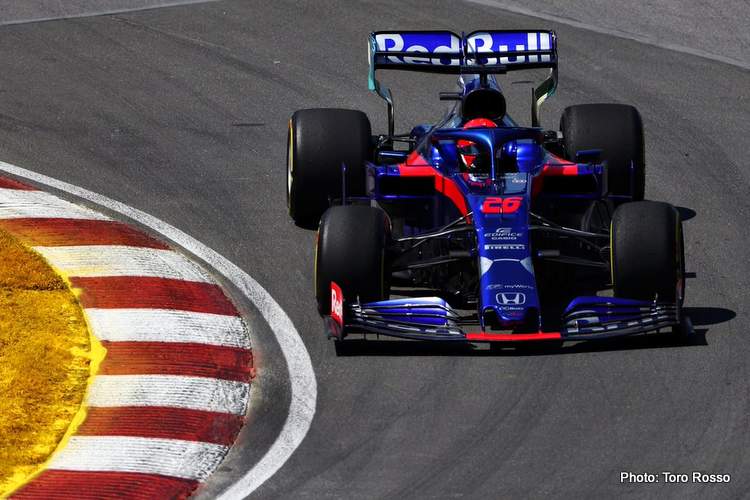 Toro Rosso report from the Canadian Grand Prix, Round 7 of the 2019 Formula 1 World Championship, at Circuit Gilles Villeneuve on the Île Notre-Dame in Montreal.

Daniil Kvyat, 10th: “It was a cool race! I really didn’t want to finish P11, it would have sucked if we didn’t get any points today. It was a good fight with Carlos at the end, I like having battles with him on track as it’s always on the limit, and it was nice to get the overtake done. I think we got pretty much everything we could out of the car today, so I’m very happy with how the race went. Now we’ll continue to work hard to score more points in the next races.”

Alexander Albon, DNF: “It was a tough race, we had some front wing damage at the start which pretty much put an end to my race. Maybe I could have braked later in the corner and Perez could have gone on the inside, but it is what it is. After that to be honest, the pace wasn’t so strong, so we need to have a look at that. I’ve been struggling a bit on the long runs this weekend, so we have some work to do to understand why.”

Jody Egginton, Technical Director: “Today leaves me with mixed emotions really. On the one hand, we had a good race with Dany scoring a point following a nice little end of race battle with Stroll and Sainz. On the other hand, unfortunately, the opportunity for Alex to be involved in the midfield fight has ended at the start of the race with contact, necessitating a front wing change and no possibility to come back from this.”

“On the team side, the guys performed well in the pit stops, the engineers managed the tyres and race strategy well and we have learnt a few things about our car here in Canada. We now look forward to the next few races, which we expect will suit our package a bit better.”

Franz Tost, Team Principal: “From the beginning of this weekend, our performance showed we weren’t on the same level as in Monaco. Nevertheless, the engineers and drivers did a very good job to compensate for the deficiencies we had. We started the race from P10 and P13 and both drivers had relatively good starts. Unfortunately, Alex had a collision with Giovinazzi where he lost the front wing, so we had to pit him early to change to a new one and move him onto the base tyre.”

“At this point, the race was more or less over for Alex because he lost too much time after the collision, so we retired him to save mileage on the PU. Daniil had a fantastic race and defended his position very well against Perez at the start, and towards the end of the race, he was able to increase his performance which enabled him to pass others and score a point.”

“I think this was the maximum we were able to achieve here, so we have to analyse all the data and figure out where we were losing here in Canada compared to others, to come back in the upcoming races with a stronger performance and get both cars finishing in the points.”