Renault: We’re leaving Montreal with a smile on our faces 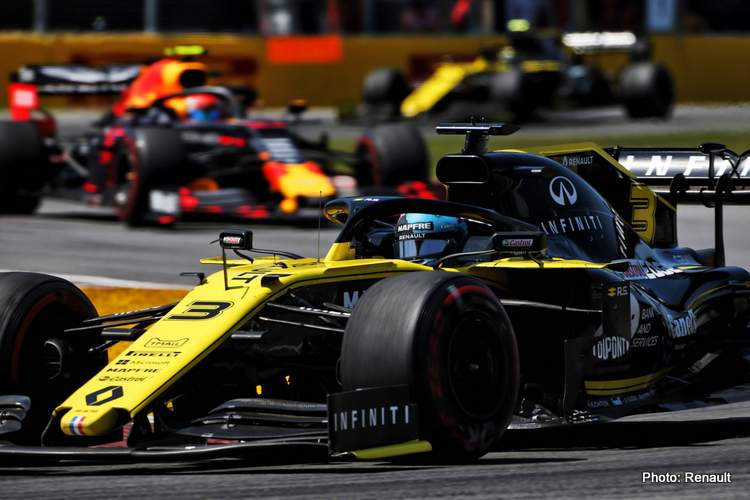 Starting from a superb fourth on the grid at a hot and sunny Circuit Gilles Villeneuve, Daniel maintained that place in the early running, lapping strongly before his pit-stop on lap eight. A quick wheel change from the crew allowed Daniel to extend his gap over Pierre Gasly.

Nico too was clean off the line from seventh place – passing Valtteri Bottas on lap one – and ran longer than Daniel on Soft tyres to build up a gap to Gasly, which ultimately led to Nico passing the Red Bull Racing driver after his pit-stop on lap sixteen.

From there, it was about maintaining positions and seeing home an excellent team finish, with Daniel finishing closely ahead of Nico.

Nico Hülkenberg, 7th: “We can be pleased with that today as it’s a really good team result. I had strong pace throughout the race, kept the Softs in good shape, and then had fresher tyres at the end. I had to back off a little bit to stop the car overheating and from there we settled for a solid team result.”

“We’re leaving here with a smile on our faces. The last three or four weekends have been compromised for various reasons and today we achieved the full potential of the car. It’s an excellent reward for the team’s hard work at both Enstone and Viry and now we have to aim to keep the momentum going.”

Daniel Ricciardo, 6th: “I did all I could out there and I’m happy with the end result. It’s the team’s first double points of the year and it’s a big one in sixth and seventh, and we can’t ask for anything more than that. There are definitely positive signs this weekend.”

“We know the top teams are superior at this stage, but still, it was a lot of fun to battle Valtteri [Bottas] for a few laps out there. We’re realistic in our approach, but the team should be proud of this weekend. They have that drive and determination to push on now and that’s really encouraging.”

Cyril Abiteboul, Team Principal: “This weekend is no more than the blueprint we set ourselves as an objective and the demonstration that we are able to achieve it. We need it to continue in the upcoming races and Daniel’s sixth position and Nico’s seventh, the best possible results at this stage under normal conditions, restart our season.”

“The drivers were faultless all over the weekend. Daniel was exceptional in his qualifying lap yesterday, he gave us all a smile nearly as wide as his!”

“The rest of the team executed everything impeccably giving us confidence back while also not forgetting errors made at the beginning of the season. We remain very concentrated and conscious of the work there is left to do.”

“We’re moving forward to the French Grand Prix from tonight, as it marks the second stage of our recovery plan after the first one on the engine side, which has benefitted from the visibility and the recognition it deserved on the most challenging circuits of the calendar.”