Ricciardo: The start could be interesting 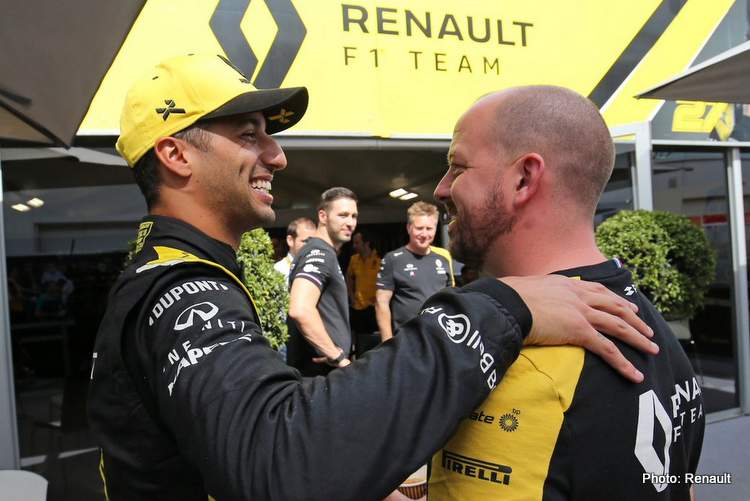 It’s back! Daniel Ricciardo’s mega-smile returned after qualifying for the Canadian Grand Prix, the Renault driver pumped by an unexpected fourth place on the grid, his best starting spot since he joined the French team, said the achievement felt like pole position.

It would be fair to say that Ricciardo-Renault partnership has been somewhat underwhelming thus far, largely because Renault have not delivered the package expected in the first half dozen races of this season.

But that all changed at the power-friendly Circuit Gilles Villeneuve where the Renault brigade enjoyed one of their best Saturday afternoons to date, it was an impressive turnaround by all at Vichy and re-established them ahead of Honda in the PU-power stakes.

Ricciardo told reporters after a dramatic and enthralling session in Montreal, “I never thought I’d be so happy for a fourth place in qualifying – it feels like a pole position! It was so cool when they told me over the radio I was fourth.”

“I’m really happy for the team today. This track is fun, I’ve always enjoyed it here. We seemed quick from the start of the day. Even yesterday we were fast, but we made further improvements and managed to put it all together for qualifying.”

“It’s good, it’s really good. It shows that there is certainly something there… For sure with the car, it’s making progress, it is getting better – that’s shown in the past three weekends, but me personally as well, the more seat time I’m getting in it, the more I’m starting to get on top of it.”

“Obviously we do want to capitalise in the race and get the bag of points that maybe we lost in Monaco. We’ll see – the start could be interesting. For now, we’ll enjoy this moment as a fourth in qualifying is huge for us.”

Nico Hulkenberg was a quarter of a second shy of his teammate and will start from seventh, ahead of a tight midfield which will be interesting to watch as they snake through the Turn 1 and Turn 2 complex on lap one.

McLaren made it four Renault powered cars in the top ten for the first time this season, with Lando Norris and Carlos Sainz eighth and ninth respectively.

F1 needs Renault back at the front as soon as possible, hopefully, this is the first big step away from the mediocrity that has been the first quarter of their season.

On the other side of the coin, Honda (who Renault have needle with vis-a-vis Red Bull) only had one car in the top ten with Pierre Gasly in fifth. With Max Verstappen stranded in Q2 and set to start from 11th, the grid is out of sync and thus, it could be argued, that it was a somewhat fortuitous result, but then: that’s racing!

It was a big day for Cyril Abiteboul and his team who needed a strong result of an unexpectedly below-par start to the season. Big improvement noted.

After recent disappointments, this will be a welcome boost ahead of the race where, should fate be kind to them, a podium will not be out of the question in what is sure to be a race of high attrition.

Big Question: Are Renault back?