Magnussen: I was just trying to push everything 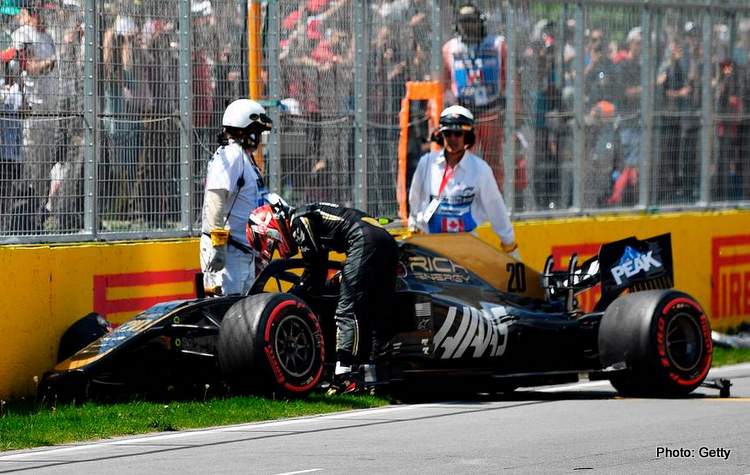 Kevin Magnussen’s rich run of form was dealt a reality check when the Dane crashed his car heavily during qualifying for the Canadian Grand Prix, the impact registering a massive 54G and requiring an overnight chassis change.

Flirting with the infamous Wall of Champions during his final Q2 run Magnussen tagged it at high speed, the impact was hard but not destructive at that point, but the energy launched the car across the track where it slammed viciously into the outside pit wall before bouncing back across the track a second time, coming to rest a mangled mess in the middle of the tarmac, forcing a red flag.

Magnussen, who was quick (and lucky) to alight the car uninjured, made no excuses, “I just hit the wall. Broke the rear suspension, then it shot me over to the pit wall in a big crash.”

“We were fast, we made it to Q3, and I was improving. I was just trying to push everything, as I knew it was going to be tight. I went on the power a little too early, and everything followed from there. I’m very sorry for the team. They have a big job to do.”

Indeed they do, with a new VF-19 chassis to build up overnight, while the team were also planning to change Magnussen’s gearbox.

“It just doesn’t seem like we can catch a break,” said Haas Team Principal Guenther Steiner. “The performance of the car was better than we expected over the whole weekend to now.

“We’ll just keep on working hard to get back to where we should be. The car is fast. We didn’t expect it to be this fast, as this has been one of our weaker circuits – at least that’s what we had anticipated. We’re optimistic looking to the next races – we just need to try to get a little less unlucky.”

To add insult to injury is the fact that the stoppage caused by Magnussen’s mishap also compromised his teammate Romain Grosjean, the Frenchman unable to complete his flying lap due to the stoppage to clear his teammate’s car.