Red Bull: We didn’t quite have enough pace 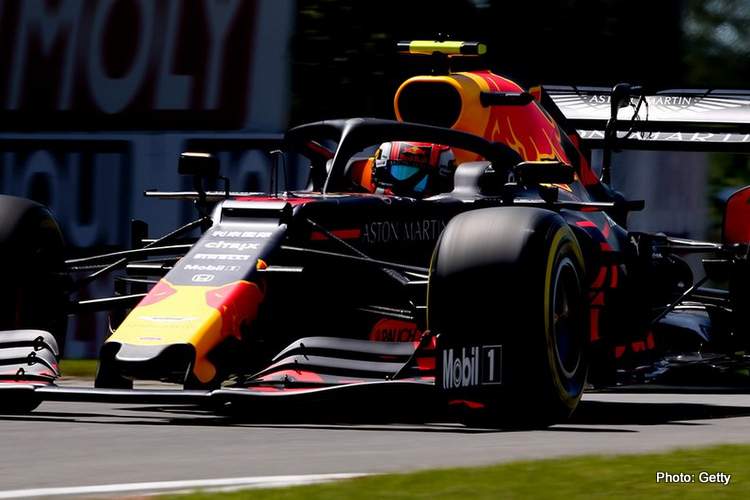 Red Bull report from qualifying the Canadian Grand Prix weekend, Round 7 of the 2019 Formula 1 World Championship, at Circuit Gilles Villeneuve on the Île Notre-Dame in Montreal.

“It was just unlucky today and these things happen in Formula 1. We tried to get through to Q3 on the medium but the tyre didn’t feel fantastic for us and with the traffic at the hairpin it didn’t really work out. We then went out on the soft, I was on a decent lap to make it through to Q3 but then the red flag came out and I couldn’t finish the lap. Starting 11th or maybe tenth depending on what’s going on with the Haas will be tricky as I have to clear the midfield before closing the gap to the leaders. That’s how it goes sometimes and you can never predict someone being in the wall. It’s not where we want to start as I want to be fighting the leader, but we should be able to recover our positions and still have a good race.”

“I think qualifying was pretty good. I didn’t have any tow and tried to squeeze everything I had out of the lap. I was pretty close to third place, but I think P5 is a good starting position for tomorrow and I think we can be happy with that. It was all pretty close today, we just missed a little bit.”

“Tomorrow we know we have to start with the softs and that’s going to be a bit tricky, especially as apparently the weather will be even hotter than today but I think we will make the race pretty exciting to watch. I hope we can keep the pace and we will push as much as we can to challenge the top three.”

Christian Horner, Team Principal: “It was a frustrating qualifying for Max today. He had good pace in Q1 and we elected to go on the medium tyre, which would have been our start tyre, mirroring the strategy of Ferrari and Mercedes. We didn’t quite have enough pace on the medium and caught traffic so needed to run again in Q2 on the soft.”

“Max was comfortably within the Q3 cut-off on his final lap but unfortunately the red flag caused by the Haas immediately stopped the session and he was unable to complete the lap. P11 for Max is obviously a disappointing grid position for what promised to be much more.”

“Pierre made it comfortably through to Q3 on the soft tyre. He then took a different strategy by running three timed laps and a strong final lap put him P5 on the grid for tomorrow’s race, which now promises to be an exciting Canadian Grand Prix.”