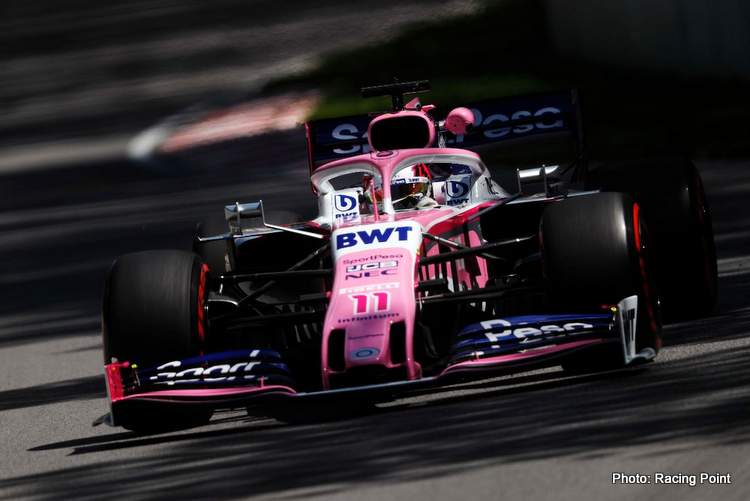 Racing Point report from qualifying the Canadian Grand Prix weekend, Round 7 of the 2019 Formula 1 World Championship, at Circuit Gilles Villeneuve on the Île Notre-Dame in Montreal.

“The pace was there to go through to Q2 and beyond. That’s the worst feeling you can have as a driver, when you know you could have done much better. I had a lockup into turn ten and lost time there. The preparation lap was also difficult, with a lot of cars going into the final corner so close together, which wasn’t ideal.”

“The gaps are very small and we thought we had more of a margin than we did. It was about getting a good lap and I didn’t perform 100%. Just a couple of hundredths made the difference in the end, so to find ourselves out in Q1 because I didn’t maximise the car’s performance hurts a lot – especially knowing how much hard work the whole team have done to improve the car recently.”

“We’ll see what we are able to do tomorrow. It’s going to be a hot race, which will make it difficult with the management of the brakes because they suffer a lot here. We won’t give up; there’s still a long way to go and I want to come away from Montreal with some points.”

“It’s wasn’t an easy day with the engine change having a big impact on the final result. I missed out on doing any laps in final practice and we had to go back to the old spec engine, which is several tenths down on performance. The guys and girls in the garage did a great job to fit the new power unit in time for qualifying, but I just felt on the back foot going into the session.”

“Without these problems, I’m sure I could have gone further in qualifying. I still feel positive about tomorrow: it’s my home race and I’m going to give it my best shot. I remember in 2017 I came back from a difficult qualifying to score my first F1 points in Montreal. I need to pull something similar out of my pocket tomorrow.”

Otmar Szafnauer, Team Principal: “Overall a tough and disappointing day. An engine failure on Lance’s car at the start of final practice proved costly and robbed Lance of any running ahead of qualifying. We were forced to switch back to PU1 – the one used in the previous six events rather than benefitting from a fresh power unit with the phase two update.”

“With the margins so small in the middle of the pack, it certainly cost Lance getting into Q2. On the other side of the garage, Sergio didn’t get together a tidy lap and also dropped out of qualifying early.”

“Having looked competitive in all of the practice sessions, it’s frustrating not to convert our promise into representative grid positions. We now need to focus on fighting back tomorrow, using our race pace to try and come through the field to score points.”