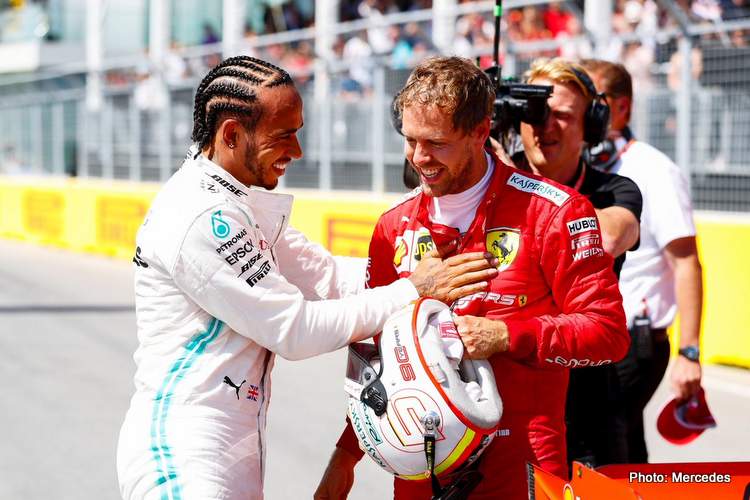 Sebastian Vettel will start the 2019 Canadian Grand Prix from pole position when he powered around in the fastest time in qualifying on Saturday at Circuit Gilles Villeneuve, on an afternoon in which the legendary Wall of Champions claimed Haas driver as a victim.

Vettel left the best for last when he blasted around the Circuit Gilles Villeneuve in a record lap time of 1:10.240 to claim the top spot start for tomorrows race stealing it from Lewis Hamilton in a thriller. It was qualifying that had us on the edge of our seats and deserving of a standing ovation

It was a stellar lap from Vettel, arguably his best ever at a crucial time for Ferrari morale and psyche, and will provide food for thought for Mercedes.

Hamilton looked set for pole at one stage, and somewhat out the blue Vettel found the kind of lap that his rival is famous for. Credit to the reigning World Champion with his humility in defeat, quick to congratulate his rival who was denied a seventh pole on the Ile.

The Briton said, “I don’t feel disappointment, we gave it everything I had got. They were faster and in the last sector they were killing us, the timing was right, procedures were perfect, we had P1 for a second, but we knew they were quick.”

“I’m glad I was able to split the Ferraris. The weather is fantastic, we’ve got some great fans here so hopefully, we can put on a great show.”

Charles Leclerc was third, the Ferrari youngster was a whopping six tenths slower than his elder teammate. Hierarchy reaffirmed by Vettel, for now.

The German said afterwards, “Well he is good in qualifying. I’m full of adrenaline. You know what, the feeling in the car when it just keeps coming and the feeling – it felt so good.”

“I enjoyed it and I’m very happy and happy for the team over the last few races, it’s been very tough. The car was much better, we have the soft tyre we managed to go through with the medium but we can go the distance, ” he added.

Leclerc summed up,  “I don’t really know I struggled with the car and with the set-up. I struggled with Q1 so I need to work with that on trying to have the right set up for the final Q3 time. Congratulations to Seb he deserves it and hopefully, I’ll have a better race from my side tomorrow. We are strong on the long run pace and hopefully, tomorrow will be the same and we can have a good run from there.”

It was also a day when we witnessed an incredible turnaround by Renault from the down of Barcelona to a high on an afternoon where Daniel Ricciardo qualified fourth. The French manufacturer has made an impressive leap in performance, which the Aussie maximised to score his best start for the team since his arrival. It was good to see the biggest smile in F1 back in action.

In fact, it was a great day for the entire brigade with Nico Hulkenberg seventh, and McLaren duo Lando Norris and Carlos Sainz eighth and ninth on a day when all four cars were in the top ten and showed up their Honda rivals who only had Pierre Gasly flying the flag in Q1. He will start from fifth.

Renault are clearly stronger in Canada than Honda.

Red Bull teammate Max Verstappen was stranded in Q2 after Magnussen’s crash compromised his lap and the session under the red flag. The Dane was on form and did enough to make it through to Q3 but obviously did not run.

Verstappen’s maturity will be put to test tomorrow as he starts out of sync in the wrong end of the midfield while Magnussen’s crew will be working all night to get his car onto the tenth grid spot.

Valtteri Bottas put himself out after contention after the ‘save of the century’ kept his car out of the narrow walls of the track on Ile Notre Dam. It was a masterful ‘catch’ which probably sapped him of any  adrenalin he might have had stored for his final stab. He will start sixth

Mercedes team chief took it on the chin, “I think credit to Ferrari, they had the fastest car and Sebastian had a stunning lap to be on pole. I think we would have given them a good fight, Lewis had two purple sectors but made a mistake in the hairpin and that’s why it wasn’t enough.”

Alfa Romeo were also disappointing with Kimi Raikkonen struggling down in 17th, however rookie Antonio Giovinazzi did find some form to finish 13th.

It was a highly disappointing afternoon for Racing Point with both cars failing to make it beyond Q1, Sergio Perez 16th and Lance Stroll 18th.

Williams were typically anchored to the bottom, George Russell seven tenths faster than Robert Kubica in the sister car. 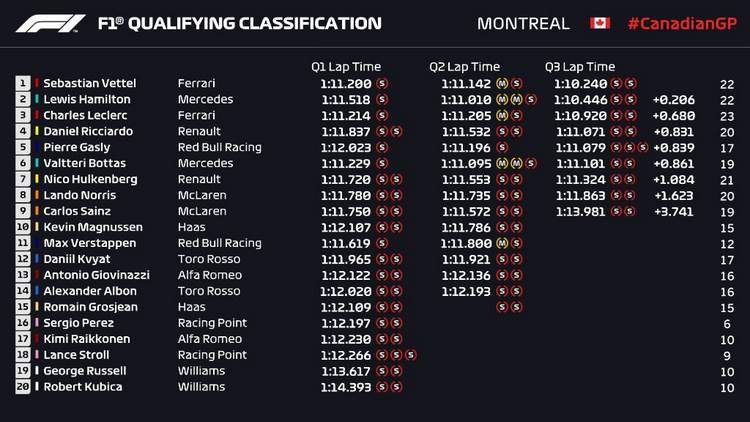