McLaren: We’re looking good to fight for some solid points 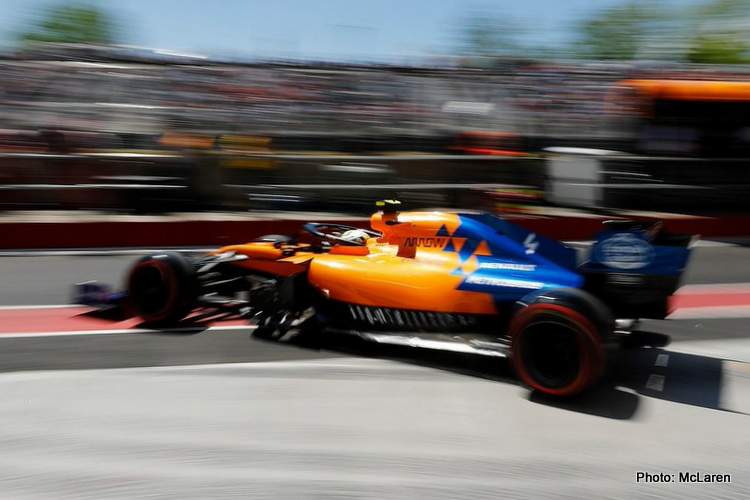 McLaren report from qualifying the Canadian Grand Prix weekend, Round 7 of the 2019 Formula 1 World Championship, at Circuit Gilles Villeneuve on the Île Notre-Dame in Montreal.

“Overall, we can be satisfied with having both cars in Q3, which was one of the targets of the weekend. However, I made a mistake on my last run in Q3 and didn’t put together the lap we deserved today, which is a shame and I’m sorry for the team. I wanted to put the car as high as possible but these things can happen when pushing the limits of the track.

“Tomorrow we’re not starting where we wanted because of a penalty which is disappointing, but I’m confident we have a good chance of moving forwards and getting some points. Our pace was encouraging so I look forward to tomorrow. I like this track and we’ll be ready to grab any opportunity out there.”

“It was a perfect turnaround compared to yesterday and a good quali result in the end. Today was an improvement but it could’ve been even better – I didn’t do a great lap at the end of Q3. But P8 is a nice result and it gives me a good starting position for tomorrow.

“It’s a fun but tricky track and I gained in confidence with every lap. I was a long way off Carlos yesterday so I’m much happier today. I needed to turn things around and I was back on the pace in FP3. The Renaults were fast in quali so I couldn’t do a lot more.”

Andreas Seidl, Team Principal: “It was good to be back with two cars in Q3 recording P8 and P9. We made overnight changes and FP3 confirmed they had been positive, but it was clear qualifying would be a tight battle and that’s exactly how it turned out. Quali was well executed by the team and drivers with everything that was going on, other cars being off-sequence on track, yellow flags and then the red flag.

“It was different to some previous quali sessions this year, as we struggled a little today to continuously extract more performance out of the cars run-by-run. It’s fair to say that we were on a knife edge regarding progressing into Q3 with both cars at the end of Q2, but the red flag definitely didn’t harm us.

“Unfortunately, Carlos was subsequently given a three-place penalty. However, I believe with our starting positions, combined with the encouraging long runs we made on Friday, we’re looking good to fight for some solid points tomorrow. We now switch our focus to preparing for the race which looks likely to be very exciting.”