Red Bull: We tested a lot of things in FP1 and FP2 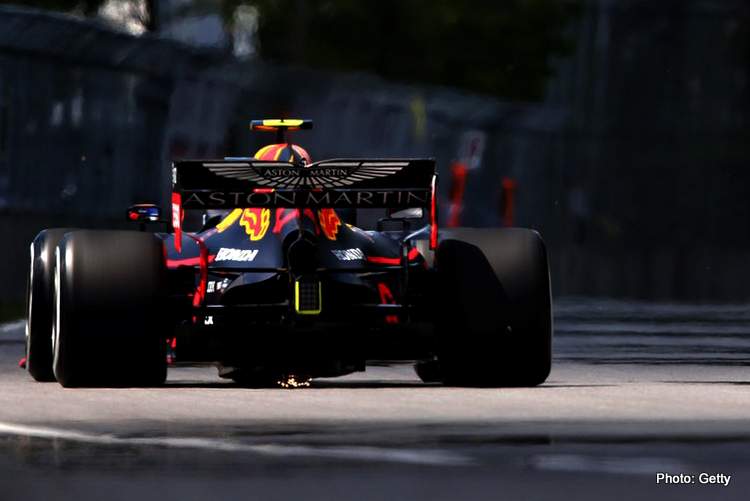 Red Bull drivers report from day one of the Canadian Grand Prix weekend, Round 7 of the 2019 Formula 1 World Championship, at Circuit Gilles Villeneuve on the Île Notre-Dame in Montreal.

“For me FP1 was fine and I felt good in the car. It maybe didn’t look easy from the outside in FP2 but from my side the car also felt good. I couldn’t finish the push lap in FP2 which was unfortunate. As I arrived at the last chicane I was in the wake of Pierre’s car and I understeered into the wall.”

“It’s a shame and we missed a bit of running but when we were running the pace was pretty decent. Of course we want to do better and I think the slippery track was also not in our favour today but the long runs look competitive, so I’m happy about that, even with the disrupted running and we just have fine tuning to do for tomorrow.”

“It’s very dusty out there and I had to use four or five tear-offs when usually I don’t even use one, it’s a bit too much, especially off-line, but hopefully conditions will improve tomorrow.”

“Today we tested a lot of things in FP1 and FP2 but at the moment I seem to be lacking a bit of pace, so we need to analyse everything tonight and come up with some solutions for tomorrow. We had high tyre degradation but maybe that will make the race interesting on Sunday as also other teams were struggling with the tyres so we are in the same boat.”

“I didn’t see exactly what happened with Max, I was preparing my lap and starting a new push lap, when they told me he was coming so I tried to push and be out of his way. It’s still early to say what’s possible in qualifying tomorrow and we have one more practice session, so we need to do some work tonight. I don’t know if we will be able to compete with Mercedes and Ferrari but we will try everything we can.”