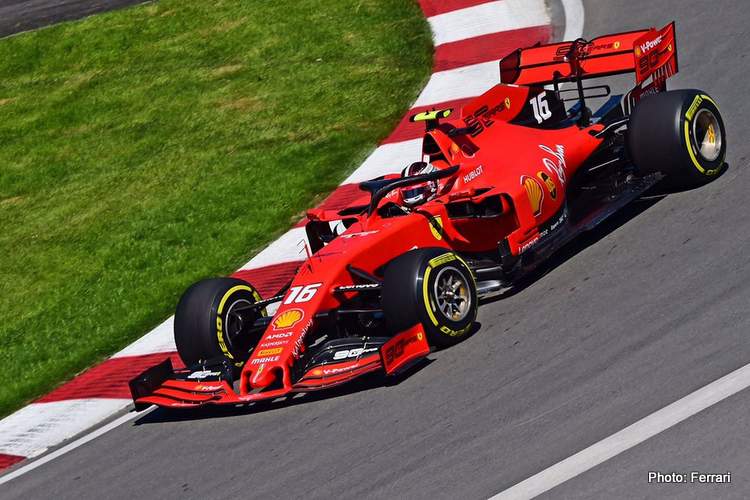 Ferrari driver Charles Leclerc topped the second free practice session of the Canadian Grand Prix, heading his teammate Sebastian Vettel as the Reds hogged the top of the timing screens while Mercedes suffered a setback when world Lewis Hamilton crashed 26 minutes into proceedings.

Leclerc set a best lap time of 1:12.177 which was good enough for top spot, six-tenths faster than the best time in FP1 earlier in the day and a tenth of a second ahead of Vettel in second.

A tenth and a bit adrift, in third, was Valtteri Bottas in the Mercedes while teammate Hamilton spent the final hour watching as his crew repaired his car after a rare mistake by the World Champion.

Before the team confirmed that the #44 car would not return to the track as it underwent repairs them team Tweeted: “After his hit with the wall, we’re changing the whole rear-end of Lewis’ car as a precaution.”

Carlos Sainz delivered a wonder lap to finish fourth fastest, four tenths down on the top time as the McLaren looked nimble in his hands while rookie teammate Lando Norris was seven tenths shy, in 11th. The Spaniard starting to justify why McLaren believed in him when others did not.

Kevin Magnussen was fifth fastest in the Haas, a tad quicker than Hamilton who only did eight laps while most of his rivals did north of 40 tours around the Circuit Gilles Villeneuve.

The Dane, solid as usual, flying the flag for his team by getting on with business, while teammate Romain Grosjean continues to soil his reputation with mistakes and fumbles on track. The Frenchman, in 17th, was six tenths slower than his teammate.

Racing Point found some pace in the afternoon with Sergio Perez carrying his morning form to the afternoon session where he ended seventh-fastest, a tenth and a half up on Lance Stroll is the sister car. The Canadian rounding out the top ten.

Sandwiched between the pink cars, on the timing screens, were Renault duo of Daniel Ricciardo and Nico Hulkenberg in eighth and ninth respectively.

Red Bull’s Max Verstappen was conspicuous by his absence in the top ten, the Dutchman smacked the ‘Wall of Champions’ side-on and suffered damage which kept him in the pits for half the 90-minutes. He only did 22 laps.

It was not a good day for Honda power as apart from Verstappen’s mishap, teammate Pierre Gasly was 13th, over a second down on the top time, with Toro Rosso duo Aex Albon and Daniil Kvyat 14th and 15th respectively. Honda are either seriously lacking horsepower or have yet to turn things up.

The one-second gap Mercedes had to the next best after FP1 appears to have disappeared… for now. No doubt they have a lot more firepower which they will unleash in required amounts up to and including Q3.

What Ferrari have to counter their rivals on Saturday afternoon will determine if today is the surge that triggers a much-needed resurgence for the Italian team or another false dawn. 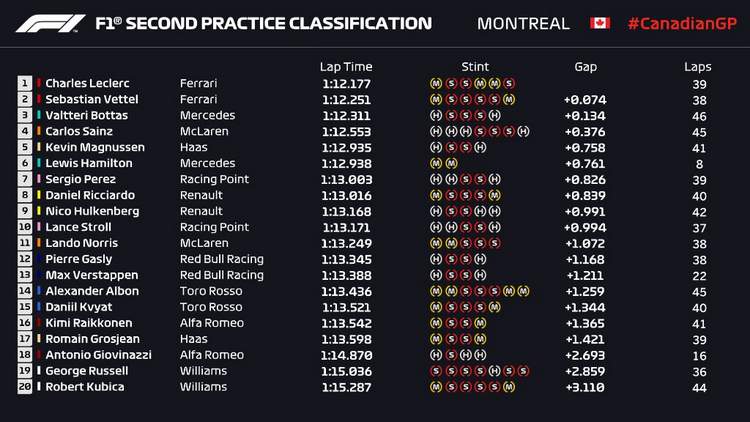