Haas: We’re pretty happy with what we learned 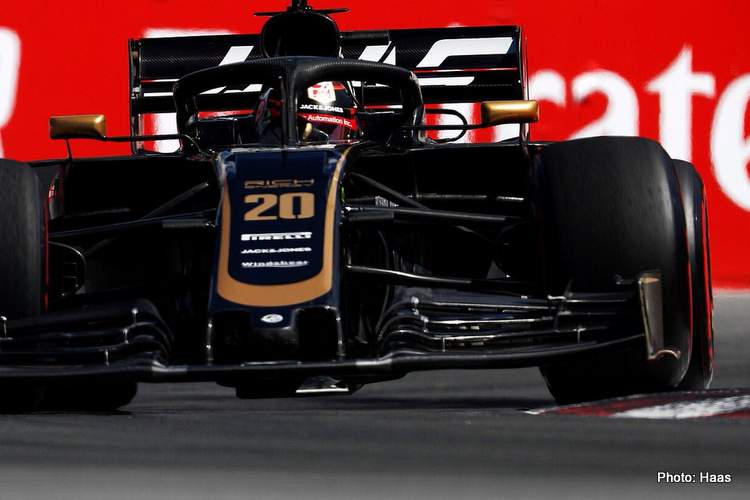 The seventh round of the 2019 FIA Formula 1 World Championship began with practice Friday at Circuit Gilles Villeneuve in Montreal as teams prepared for Sunday’s Canadian Grand Prix.

Rich Energy Haas F1 Team drivers Romain Grosjean and Kevin Magnussen and their competitors were challenged to find grip on an unusually dusty and dirty track surface, particularly in the opening session. Both Grosjean and Magnussen began FP1 on a set of Pirelli P Zero Yellow medium tires before transitioning to the Red softs for the remainder of the session. Magnussen turned a fast time of 1:14.202 on softs and was 10th-best overall. Grosjean set the 15th-best time of 1:14.645, also on softs.

Speeds and lap times improved slightly in FP2 as a vast majority of drivers continued to struggle finding grip. Magnussen, however, showed significant improvement in FP2, which he began on the Pirelli P Zero White hard tire before switching to the softs and concluding the session with another run on hards. His fast lap of 1:12.935 was fifth-best in the session, and 1.267 seconds better than his fast lap in FP1.

In addition to the challenge to find grip, Grosjean also struggled with a racecar he deemed “inconsistent” throughout the day. Grosjean began FP2 on medium tires before transitioning to softs and finishing on mediums. His best lap of 1:13.598 came softs, and placed him 17th on the timesheet for the session. It was a 1.047-of-a-second improvement over his best lap in FP1.

Romain Grosjean: “It’s not been ideal. I generally struggled with the pace and the grip – in the rear end mainly. The balance has been inconsistent, and around here that doesn’t bring confidence. We’re going to try to understand what’s happening. Kevin’s been very fast in FP2, which is good to see, so I’m sure we’re going to find something and get up there tomorrow.”

Kevin Magnussen: “It’s not been too bad today. Our running on low fuel was good, on high fuel we just need to make sure we’re on top of the tire management, that’s still the main thing to work on. We’ll do what we can tonight to learn what we need in order to get more from the soft tire here. I’m not sure – in terms of the qualifying pace, how much more there is to come, hopefully a bit. It was running smoothly today, we had no major issues. Our main focus is on the race pace.”

Guenther Steiner, Haas: “As normal in Canada, FP1 is all about cleaning the race track – just to get a feel for it. FP2 is more representative of what you need for the actual set-up. We had a good day of work, we completed the program laid out. We’re pretty happy with what we learned, and we’re ready for tomorrow.”