Ericsson: My Alfa Romeo crew brought me luck in Detroit 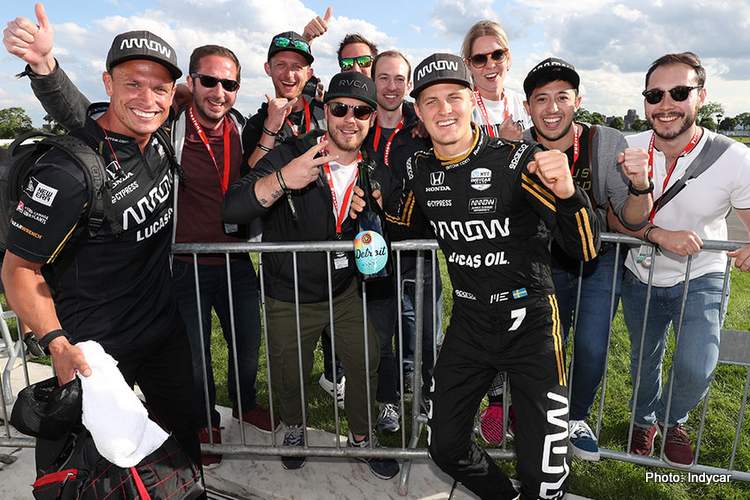 After five years in Formula 1, Marcus Ericsson is fast adapting to his ‘new life’ as an Indycar driver and despite a below the radar start to the season, the likeable Swede has grown in stature and second place in Detroit on this past weekend.

Speaking to reporters after podium celebrations in Motor City, Ericsson told reporters that it brought him “good luck” to have members of Alfa Romeo, the F1 team he drove for, on hand at the Chevrolet Detroit Grand Prix.

Ericsson placed second, 1.9419 seconds behind winner Scott Dixon. After the race, the 28-year-old Swede said it was his first podium result of any kind since he raced in the FIA GP2 Series in 2013. He drove in F1 from 2014-18 but could only manage a best finish of eighth place in that time.

“I’m super happy,” Ericsson said Sunday. “It’s been one of those years where we’ve had pretty much every weekend good pace, but for some reason, there’s always been something that’s happened. It’s made it not come together result-wise.

“I think our results have not been sort of representative of the pace we’ve got. That’s why it was such a nice feeling finally to get it together for a whole race today.”

In his first seven NTT IndyCar Series races, Ericsson’s top finish was seventh place at the Honda Indy Grand Prix of Alabama presented by AmFirst in April. When he qualified 12th for Sunday’s race on the tight 2.35-mile temporary street course, the prospects for a podium didn’t appear promising.

But Ericsson’s #7 Arrow SPM Honda crew opted for a three-stop strategy, bringing him to pit lane under full-course cautions on Laps 2 and 17. It allowed Ericsson to pick his way through the field and lead his first two laps in the series before making his final pit stop under green on Lap 47 of 70. He returned in third place, moved up a spot when Will Power pitted on Lap 49 and stayed in second to the finish.

“We didn’t get the perfect lap together in qualifying, but in the race executed very well,” Ericsson said. “The team did great strategy calls, pit stops. I have to thank the crew because they did an amazing job. Yeah, it’s just a great feeling to be on the podium again.”

The feeling wasn’t as great when Indycar red-flagged the race with five laps left to clean the track following a single-car crash involving Felix Rosenqvist, the other Swedish series rookie. Surrounded by Indianapolis 500 winners in the running order – Dixon in front and Power, Ryan Hunter-Reay and Alexander Rossi directly behind – Ericsson knew he was in for a battle when the race restarted on Lap 67.

“When (the red flag) happened, it’s obviously not the best thing maybe from purely my own perspective,” he said. “I was on for my first podium and, obviously, whenever you restart, there is a risk something will happen. I was feeling confident in myself and in the car. After every restart, we managed to pull away, Scott and I. I was feeling good about it.

“I think it’s great for the series that we do it this way,” Ericsson said of the red-flag decision. “We do it for the fans, for the sport. I think that’s a great thing. At the moment when it was a red flag, five laps to go, I didn’t like it that much.

“But now I think it was a very good thing,” he added, laughing.

He also smiled when talking of the support from members of the Alfa Romeo F1 team (pictured above with Ericsson) who came to Detroit for the weekend in advance of the Canadian Grand Prix on June 9. Ericsson remains a reserve driver for Alfa Romeo in addition to his NTT IndyCar Series duties.

“Ten of the guys from Alfa Romeo that have worked for me the last few years were here supporting this weekend,” he said. “Obviously, they go to Montreal next weekend to race. It was good to see them. They must have brought some good luck as well.”

Despite starting mid-pack in Sunday’s 22-car race after finishing 13th in Race 1 on Saturday, Ericsson knew a result like Sunday’s could still happen.

“That’s the thing with Indycar that I’ve learned this year. Even if you’re fast, that doesn’t mean you will get a good result,” Ericsson said. “In many other series, if you have the pace, you always sort of tend to get to the front for different reasons. Here in Indycar, it’s so close, the competition between P1 and P22 or 24 is a second.

“That means you have so many moments in a race where you need to execute well. You need to make the pit stops, strategy calls right. The pit crew needs to do their job right. Out laps on cold tires, restarts, all these things. We executed extremely well today.”

It was especially rewarding following a difficult month of May when he crashed out in last place at the Indycar Grand Prix and finished 23rd in the Indianapolis 500 presented by Gainbridge after spinning in pit lane.

“We got that sort of success that I feel was coming for us,” Ericsson said. “It took a bit longer than I wanted. It’s been a tough month, but it’s been one of the best months probably in my life, as well.”

The NTT IndyCar Series returns to action this week with the DXC Technology 600 at Texas Motor Speedway.