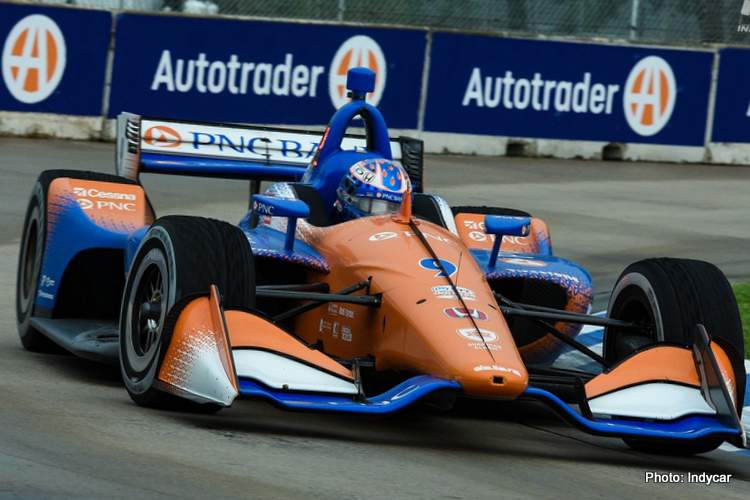 On the same day he was bestowed an honor by her majesty Queen Elizabeth II, Scott Dixon wrote another chapter in his royal Indy car history. And took a majestic dip in the Scott Fountain to celebrate.

Dixon recovered from a crash and last-place finish on Saturday to win the second race of the Chevrolet Detroit Grand Prix presented by Lear doubleheader on Sunday. The victory was the 45th of the five-time NTT IndyCar Series champion’s career and moved Dixon within seven wins of tying Mario Andretti for second on the all-time Indy car list.

Dixon crossed the Raceway at Belle Isle Park finish line 1.9419 seconds ahead of rookie Marcus Ericsson, who posted his first podium finish in his eighth series race. A day after crashing and finishing 22nd in the #9 PNC Bank Chip Ganassi Racing Honda, Dixon led 44 laps – including the last 21 on the 14-turn, 2.35-mile temporary street course.

It was Dixon’s first win in 14 races, since the Honda Indy Toronto last season, and his third at Belle Isle to tie Helio Castroneves for most wins on the circuit. Dixon won the first race of the Detroit doubleheader last year and went on to collect his fifth season title.

“Today was all about redemption,” said Dixon, adding he felt like “an idiot” for crashing by himself in Saturday’s race.

“The team nailed the strategy, the car was super-fast. We were able to get the mileage we needed to, which was going to be really tough, with the exception of those last couple cautions. I can’t believe we ended up here today and it’s just fantastic. Fantastic.”

A day after the opening race of the weekend was delayed and shortened to a 75-minute time limit, Sunday’s race was run to the full 70-lap distance under blue skies. Despite the ideal conditions, the race saw five full-course cautions for incidents on the tight and bumpy circuit.

Dixon dodged the chaos and waited out a six-minute red-flag stoppage when teammate Felix Rosenqvist crashed in Turn 1 with five laps to go. Dixon easily held off Ericsson on the Lap 67 restart and pulled comfortably away to victory. He then dove into the Scott Fountain behind the victory podium to celebrate and was joined by members of the #9 crew.

Before Sunday’s race, it was announced that Queen Elizabeth II appointed Dixon the Companion of the New Zealand Order of Merit in recognition of his services to motorsports. It came as part of the Queen’s Birthday Honours List recognizing achievements of extraordinary people across the United Kingdom. Dixon’s native New Zealand is part of the British Commonwealth.

Scott Dixon and crew in Scott Fountain“It was definitely a huge honour to get the Companion Merit of Order, which is definitely very prestigious, something you don’t expect,” Dixon said. “For me, I think it’s not like a normal accolade, like a trophy or a race win.”

“It’s something of a very different feeling, so for me, it’s definitely been outstanding. Very proud to get that.

“Yeah, a huge day and definitely not one I’m going to forget. Ericsson, who joined the NTT IndyCar Series this year after five seasons in Formula One, was pleased with his second-place finish in the #7 Arrow Schmidt Peterson Motorsports Honda. The Swede’s best result in his first seven races this season had been seventh place at Barber Motorsports Park in April.

“It was amazing, my first podium since 2013 (in GP2), and you just have to thank the whole team at Arrow SPM,” Ericsson said. “They work so hard all year and we had so much bad luck, and I’ve done mistakes when we’ve been looking really good. So, to finally get a result like this and be on the podium, I think is a great reward for all of the hard work. Now, I think we can build on this.”

Will Power recovered from gearbox damage sustained in a five-car incident on Lap 1 that stalled his car on course on the Lap 5 to finish third in the #12 Verizon Team Penske Chevrolet. The two-time Detroit winner and 2014 series champion was astounded with his turnaround in fortune.

Pagenaud, winner a week ago of the 103rd Indianapolis 500 presented by Gainbridge, was in the middle of the five-car incident on the first lap. He sustained damage to the #22 DXC Technology Team Penske Chevrolet that sent it to the paddock for repairs and returned later, but finished 12 laps off the pace.

Newgarden, who won Saturday’s race, started on pole Sunday but came together in Turn 3 with James Hinchcliffe and Alexander Rossi in a battle for position on Lap 33. Sustaining damage to the #2 Hitachi Team Penske Chevrolet that necessitated repairs, Newgarden wound up 21 laps behind the leaders.

Despite the outcome, Newgarden retained the points lead after eight of 17 races. The 2017 series champion is 15 points up on Rossi, who finished fifth Sunday in the #27 NAPA AUTO PARTS Honda, and 25 points ahead of Pagenaud. 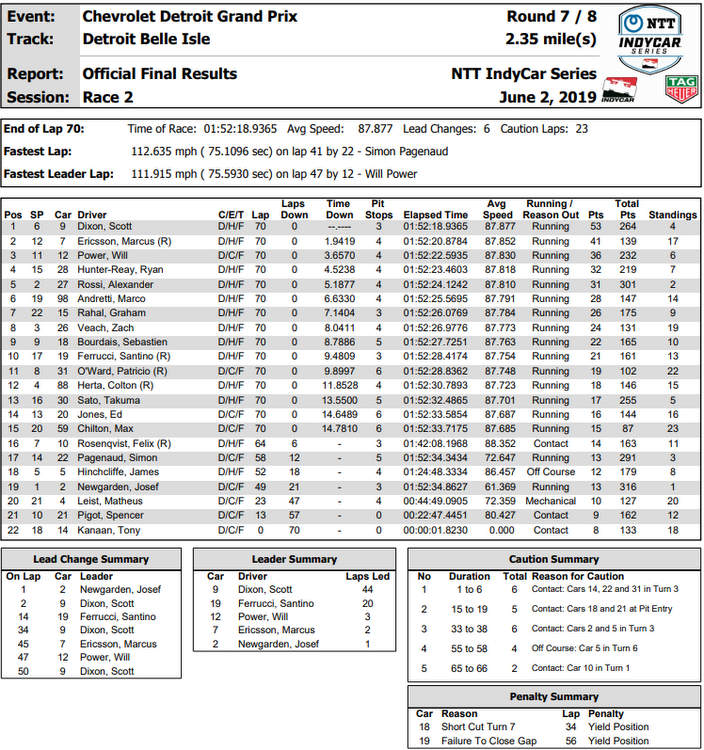