Toyota on top at the end of Le Mans Test Day 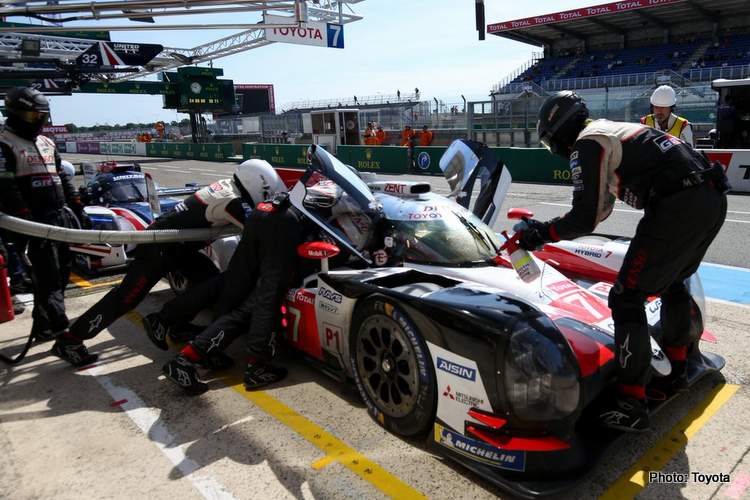 The official Test Day for the 24 Hours of Le Mans is now complete, with all 62 cars completing two four-hour test sessions. Below is a round up of what happened during this afternoon’s session at the Circuit des 24 Heures.

As temperatures continued to soar during the afternoon, it was Toyota Gazoo Racing’s #8 TS050 Hybrid of Sébastien Buemi, Kazuki Nakajima and Fernando Alonso that continued to set the pace, producing a best time of 3:19.440 after 108 laps of testing.

Several LMP2 teams topped the timesheets throughout the course of this afternoon but it was the No. 38 Jackie Chan DC Racing Oreca 07 Gibson car driven by Ho-Pin Tung, Stéphane Richelmi and Gabriel Aubry who proved to be the fastest with a time of 3:28.504. Second fastest was the No. 31 DragonSpeed ORECA 07 Gibson of Roberto Gonzales, Pastor Maldonado and Anthony Davidson – only 0.265s adrift of the LMP2 pace-setters. Signatech Alpine Matmut’s No. 36 Alpine A470 Gibson car took third. With just four points separating Jackie Chan DC Racing and Signatech Alpine Matmut in the overall LMP2 standings, the scene is set for an enthralling battle at the WEC Season Finale.

The LMGTE Pro category saw several drivers and manufacturers grappling for the top spot, with Corvette Racing’s two Chevrolet Corvette C7.Rs sandwiching the No.67 Ford Chip Ganassi Team UK entry. Jan Magnussen in the No.63 American muscle car grabbed the top spot by a margin of just 0.031s. The No. 71 AF Corse Ferrari 488 GTE was fourth quickest ahead of two Porsche 911 RSRs making it four manufacturers in the top five. Incredibly the top 12 LMGTE Pro cars (including five different manufacturers) were separated by less than one second.

A miniscule 0.073 seconds separated the top three fastest crews in LMGTE Am at the end of today’s test, with American team WeatherTech Racing clocking the quickest time of the day: 3:56.862. The No. 61 Clearwater Racing Ferrari 488 GTE was the quickest WEC entrant in the class, with the No.54 Spirit of Race Ferrari was just 0.012s behind. The Porsche 911 RSR belonging to the No. 86 Gulf Racing car was third quickest out of the nine WEC entries competing.

Five important things to remember after an action-packed day: