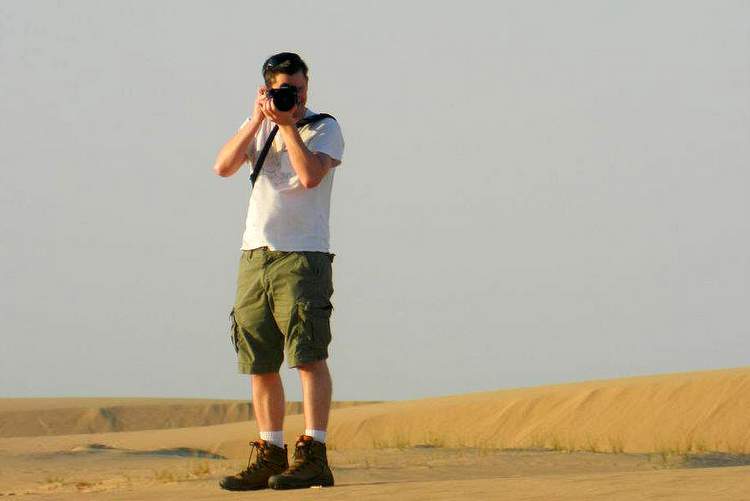 Opposite Lock penned a note on the occasion of the tenth year of the existence of GrandPrix247.com from its early origins, what makes his insight unique is that he witnessed the early start-up years as we literally sat opposite one another in the open plan Dubai Autodrome offices and the basis of this F1 site was born.

This is what Opposite Lock (pictured above) remembers:

A whole decade. A lot can happen in the world of sport, and a lot can change for a website.

Back in March 2009 Lewis Hamilton only had one driver’s title under his belt, manufacturers Honda, BMW and Toyota were all jumping the F1 ship and Brawn GP was about to surprise everyone by getting Jenson Button on pole in Australia.

Working with Paul during that time I had the privilege of watching YallaF1.com being “born”. Almost everything I know about website management came from those early days, watching Paul building the site and overcoming the growing pains of his new F1 child. It looked like a hell of a job to keep everything running properly, but he had the passion and drive to keep it going.

The site kept growing and a community started to grow with it. I remember Paul agonizing on changing the website name and abandoning the YallaF1 ethos. Turns out, evolving the site into GrandPrix247.com was the best thing he could have done, embracing the entire world community of F1 fans.

There were definitely hiccups along the way. Malicious hackers and smug trolls are part of the web landscape, but for folks who have poured their heart into a project, these pests can be soul destroying. On at least two occasions I remember Paul ready to pull the plug on the site. I’m glad he didn’t.

I was especially troubled by negative comments directed at Paul’s personally written articles. In an age where self-flattering influencers dominate the stage, marketing speech runs amok and people pen their ideas with emojis, Paul’s work is refreshingly straightforward and honest.

Luckily the good times outweigh the bad. The cheeky “Briatore: Put it in the hall!” article (1 April, 2011) still makes me chuckle.

Paul now lives in a different part of the world, but I continue to read GrandPrix247 daily. I’ve rarely missed a day for ten years now. F1 pundits and fans can be pedantic bunch, with arguments breaking out over sector times and incredibly detailed bar graphs, but GrandPrix247 seems to rise above all of that by simply offering a tidy roundup of news stories, with sprinkles of personal and historic content thrown in for spice.

I’m happy that so many others have enjoyed it as well. Now what Paul? Your F1 child is ten years old. I hope the teenage years are kind!

Inside Line: Ten years ago this F1 website journey began