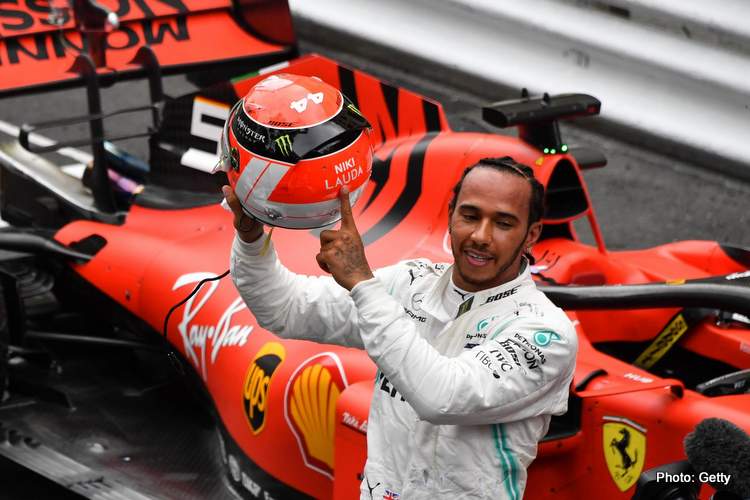 The Monaco Grand Prix is traditionally a weekend full of glamour and glitz but this weekend, all our minds were on the passing of F1 legend Niki Lauda.

It was felt throughout the weekend that started, like always at the Principality, on a Thursday.

Free practice 1 and 2 saw some surprises. Not only were Mercedes really fast, the Red Bulls could keep up and the Ferrari boys still couldn’t find grip, but it was Haas, Renault and Toro Rosso that showed great potential.

After a day of ‘rest’, it was time for FP3 and Quali on Saturday and what was expected after Thursday, Mercedes was just a tad too quick but Verstappen showed good progress and Ferrari were suddenly up there until it really mattered.

On Sunday, the race started with a front row lockout for Mercedes with Hamilton on pole, Verstappen starting third with Vettel in fourth position. The first stint remained pretty much the same at the front, but Sainz in the McLaren made up a few places.

As expected in Monaco, overtaking is nearly impossible so while it was exciting to watch, not much happened until lap nine, when Leclerc tried a move on Hulkenberg that resulted in the Ferrari spinning and puncturing his right rear tyre.

In his rush to get back to the pit, he scattered debris on the track and forcing a safety-car period during which the order was reshuffled with Hamilton still in the lead, Verstappen second (but with a five seconds penalty for an unsafe release), Vettel third and Bottas in fourth.

For more than 60 laps, the order stayed pretty much the same and thus, Hamilton won, Vettel second and Bottas third with Verstappen demoted to fourth.

Although it wasn’t shown at the finish line, Kubica had a great race, running as high as P15, before getting spun around by Giovinazzi. Thereafter the Pole’s race was effectively over as he came in 18th, just in front of the Italian rookie who was penalised for causing the collision.

Best of the Rest

Although on paper, Sainz in the McLaren was best of the rest but my kudo’s go to both Toro Rosso boys with Kvyat in seventh and Albon in eighth. This also meant that, for the first time since 1987, Honda got all 4 cars in the top eight so double points for both Red Bull teams.

It would be easy to say Williams as they are lacking so much this season but, surprisingly it wasn’t them, it was Alfa Romeo that couldn’t sustain the good start to their season. That said, I wasn’t impressed with Racing Point either.

Perez did his best to make something of the race but Stroll wasn’t in it since Thursday. He was blocking drivers, just getting in the way and also during the race he had some contacts; Raikkonen was one of the drivers not happy with him.

As mentioned in previous #TheXtraLap columns, it seems as if Ferrari lacks grip and they are unable to extract the maximum from the car. At first I thought it might have been due to the radical front-wing design, but Ferrari claim it wasn’t because of this. I’m no aero specialist but I know that all aerodynamics of a F1 car starts at the front-wing so it must have something to do with that…

Next to the aero issues, the strategies this season have been a farce at times. In Monaco, during qualifying, some smart people back at Maranello, who sit behind a lot of computers, thought a 1:12.3 was enough for Leclerc to get through to Q2, but that didn’t turn out as planned because the cut-off time was a 1:12.097s set by Hulkenberg.

During the race, Leclerc while was making his way to the front he suffered a puncture, usually you would hear the pit radio instructing a driver to return to the pits slowly but I did not hear that and looking at the speed Leclerc was carrying, I guess he didn’t hear it either. In the process of going too fast, the tyre destroyed parts of his car, which ultimately caused the safety-car to be deployed, but Leclerc’s race was done.

During the build-up towards the #MonacoGP, just one thing took over social media and that was the sudden death of F1 legend Niki Lauda, whether it was with reports, pictures, footage and/or different tributes to honour this great icon of the sport we all love.

During the race, Leclerc was a hot topic, as was Stroll, the unsafe release of Verstappen and the constant battle between Hamilton and Verstappen.

Throughout the weekend, a few penalties were given and right or wrong, some changed the outcome of the race. It was only about four hours after the race that the official classification was given by the FIA as Magnussen was handed a five seconds time penalty which dropped him from P12 to P14.

Coupled to all this, social media was pretty quiet during the #MonacoGP but that might also have been due to the fact that it was #SuperSunday and there was a lot of talk about the #Indy500 and the #CocaCola600.

In two weeks time, we’ll be racing in Canada and everyone starts again from zero on a track that brings different challenges. Looking forward to cover that weekend on the next #TheXtraLap

On a personal note, I want to wish family, friends and those close to Niki Lauda, much strength in the time to come. Niki was a man that didn’t give a shit about politics in F1 and always spoke his mind.

Some thought he was just a funny old man but he was instrumental in the building of the Mercedes team and has done a lot for our beautiful sport and we will miss him around the paddock.