Hamilton: I have been average in the first six races 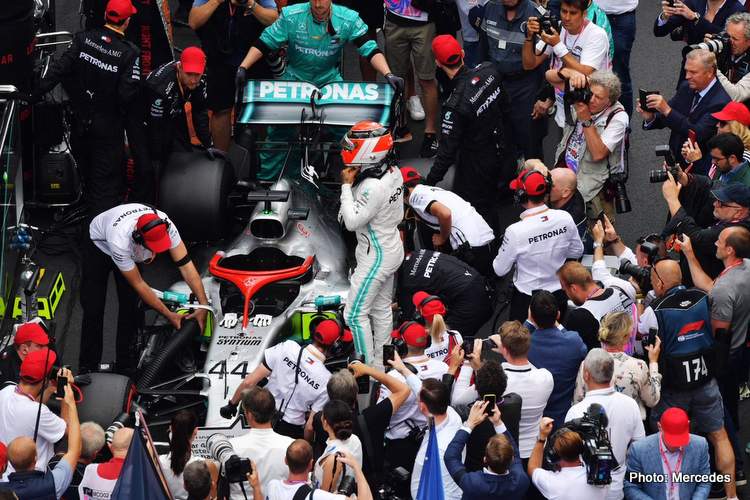 Lewis Hamilton has won four grands prix and finished second in the other two and yet the Formula 1 leader feels his performance so far this season has been all a bit average.

Rivals may want to take that with a pinch of salt, or go and lie down somewhere secluded because on paper the Briton has never had it so good.

Hamilton has also started on pole position twice, unleashed a blistering lap around the streets of Monaco at the weekend, and set one fastest lap.

He has taken a record from Michael Schumacher with his 59th pole for a single team, one more than the German great managed at Ferrari, and with 77 wins is closing in fast on Schumacher’s record 91.

The five times world champion’s own assessment, with 15 races remaining, is that he can and will do better.

“I definitely feel it´s been quite an average performance from myself, maybe above average but generally quite average for the first six races,” he told reporters on Sunday.

“I feel like I´ve got the best I could get. I´ve arrived prepared – the best prepared I could be – but in terms of extracting the true performance from the car, I feel like I´ve struggled a little bit in these six races.

Hamilton has a habit of saving the best to last, calibrating things early on and then hitting the equivalent of a turbo button after the August break.

The 34-year-old has won four of the last five world championships with Mercedes, after a first title with McLaren in 2008, but this year he is looking as competitive as he has ever been.

In 2014, when German teammate Nico Rosberg was Hamilton’s main rival and Mercedes also won the first six races, the Briton retired from the Australian season-opener before winning four in a row.

The following year he was triumphant in only three of the first six, while in 2016 eventual champion Rosberg won the opening four.

Hamilton managed two wins in the first six races in 2017, when Ferrari’s Sebastian Vettel was more of a threat, and last year was a similar story with a lucky victory in Azerbaijan and another in Spain at the same stage.

“I do anticipate things will get better,” he said, while also recognising that the past had become something of a blur.”

“I hope, at some stage, that I´m able to crack the issues that I´ve had and get back to the form that I have within me. Whether that´s the next race or 10 races from now, I can´t really say but I am very, very focused on making sure I rectify any of those [issues].”

Sunday could have gone badly wrong, with Hamilton on the wrong tyres after an early pitstop when the safety car was deployed, but he put in a champion’s drive to secure victory.

It helped that Monaco is a track where it is almost impossible to overtake, and that the chasing Max Verstappen was stuck in the wrong torque mode for much of the race, but Hamilton laid the groundwork by taking pole.

By the time he flies to Canada, after attending the funeral in Vienna of the team’s non-executive chairman and triple champion Niki Lauda, Mercedes could have taken another step forward.

“Going into the next race, a lot of analysis will be made and particularly towards trying to understand the tyres better and deliver better in terms of our processes,” said Hamilton.

“And on my side, trying to work even better with my engineers to try and extract more from my car. I know the guys back at the factory are working on developments, so obviously at the next race I think we will probably have a new engine…so the car will continue to move forwards as we will,” he added.

Big Question: How can Lewis be stopped?