Brown: We didn’t expect Carlos to be that fast so early 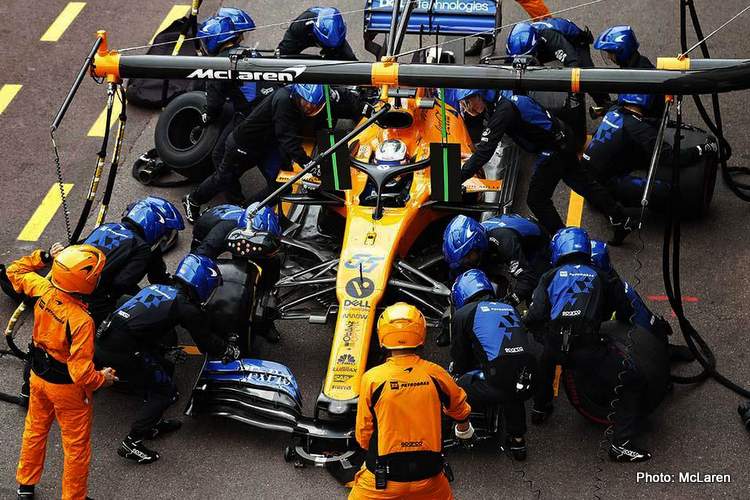 The bond between McLaren and their new driver Carlos Sainz tightened further after the Spaniard delivered an impressive performance to claim a well-deserved sixth place in Sunday’s Monaco Grand Prix.

When he was told he had finished sixth after a tense race on the ‘mean streets’ of Monte Carlo, he Spaniard roared: “What a team!”

The feeling was clearly mutual as his stellar opening lap triggered a tweet of admiration from his boss, McLaren CEO Zak Brown who was at the Principality possibly escape his Indianapolis 500 debacle.

Indeed Sainz gave the team reason to smile in the wake of a painful week, and Brown admitted to El Confidencial afterwards, “To be honest, we didn’t expect Carlos to be that fast so early, from the first day he has surprised us with his speed and professionalism.”

While the Spanish media are hoping he will their next Fernando Alonso, how good Sainz really is remains a mystery. He was comprehensively beaten by Max Verstappen when they were rookie teammates at Toro Rosso in 2015 and eventually deemed excess to requirements with Red Bull.

In 2018, Nico Hulkenberg had the better of him when the pair shared a garage at Renault, so much so that the French outfit preferred to throw big money at luring Daniel Ricciardo to the team when they could have had Sainz. No reading between the lines required.

After some frustrating early races, he was finally comfortable at Monaco this weekend. At a venue where the driver makes a difference, he gave a good account of himself considering that the midfield was particularly tight. His sixth place was Best of the Rest on the day.

A result which frankly surprised the Spaniard himself who told reporters, “Who would have thought after finishing the 15th in the FP3 I was going to finish the Best of the Rest, in sixth place?”

New team chief Andreas Seidl was one of the first to congratulate the Spaniard with a telling bear hug. It was a signifcant result for McLaren at a time when headlines have not been kind to the organisation as a whole.

The hard work on Sunday afternoon was done in less than thirty seconds or the whatever time it took from the start to the exit of Casino Square where the #55 McLaren cheekily squeezed by the Toro Rosso duo and tucked in under the wing of Gasly.

Thereafter Sainz kept it clean and precise, while his team delivered the fastest pitstop of the race in the process to cement the result.

“It was an amazing first lap after passing both Toro Rossos around the outside at Turn 3. It was probably one of the best overtaking moves of my life,” reckoned the 24-year-old.

“After that, a good pit call to stay out under the Safety Car and some solid laps to earn P6. Another fast pit-stop by our mechanics, a great lap to defend from the Kvyat stop and then it was just about managing the tyres and bringing it home.”

“Important points on another track that really didn’t suit us much. We need to keep pushing to improve, but congrats to all the team for today.”

“I’m sure good results will come. We have a good car, sure, we just need to have patience, hard work, dedication and a good attitude, so at some point luck will come back to us,” added Sainz.

After six rounds Sainz is seventh in the this year’s championship, top of the ‘Formula 1.5’ or ‘Formula B’ or Best of the Rest posse, while McLaren are fourth in the constructors’ standings.