Red Bull: We were very competitive 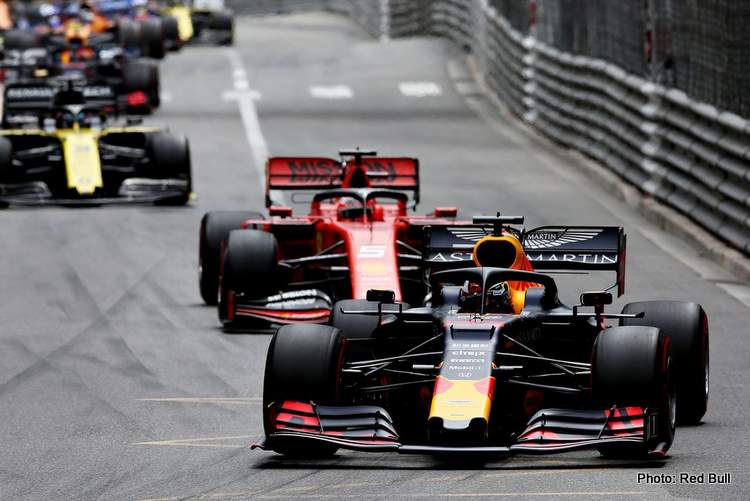 Red Bull report from the Monaco Grand Prix, Round 6 of the 2019 Formula 1 World Championship, on the streets of Monte-Carlo.

“I gave it my all today and I had a fun race. I think we were very competitive and I enjoyed putting the pressure on and trying to go for the win. You know when you’re up against Lewis it’s going to be very hard but I kept pushing him and I tried to force him into a mistake. I made him use his tyres a bit more than he wanted which meant I could attack.”

“At one point I could see his tyres really dropping off and there were a few corners on the track where he was really slow which meant I could line up a move, but we just couldn’t get close enough. With a few laps to go, I thought I’m going to try it now and see what happens.”

“We touched but luckily nothing came of it. The penalty from the pit stop is unfortunate, but I don’t think the Team did anything wrong and it is impossible to see in that tight pit lane. When you look at our pace we were very strong and that’s the most important thing. Of course, I would have liked to be on the podium but I enjoyed the race and you win some, you lose some.”

“It’s easy to say with a few more laps I would have got him but I tried my very best and that was all I could do. The Team did a mega job all weekend and we tried everything we could to get that win today.”

“It was a really positive day and we can be very pleased with fifth position after starting eighth in Monaco which is a difficult track to recover positions on. We had a very good strategy and a really great car to race. I enjoyed driving such a fast car on a track like this and to be able to push so hard at the end and put in some very quick laps and to finish within ten seconds of the leader after starting eighth. I’m really happy and now we need to keep working so we can deliver similar performances in the coming weekends.”

Christian Horner, Team Principal: “Max drove the wheels off the car today. He got away in grid position and had a look at passing Bottas into turn one but wasn’t quite far enough alongside. The mechanics did a great job with the pit stop and Max left the box before Bottas which, as per the rules, is fine.”

“Unfortunately, it all got a bit too tight resulting in the Mercedes making contact with the barrier and the stewards issuing Max a five-second penalty. Max drove like a lion for the rest of the race and tried everything he could to pass Lewis. We had a better tyre strategy and there was only really one lap where he got close to making a move into the chicane.”

“Finishing second on the road, but with the top four so close, he was denied a podium. Finishing fourth is tough for Max today after a drive like that but as always, he didn’t give up until the checkered flag. Pierre really made a great recovery having got the penalty yesterday and starting in P8.”

“He kept his head, was quick when he had clear track and managed to move up the order. With the benefit of the second pit stop, he smashed the fastest lap for that extra point which is important for the Team and was able to progress up to P5. A great job by him and the Team and also congratulations to Honda for having four Honda-powered cars in the top eight.”