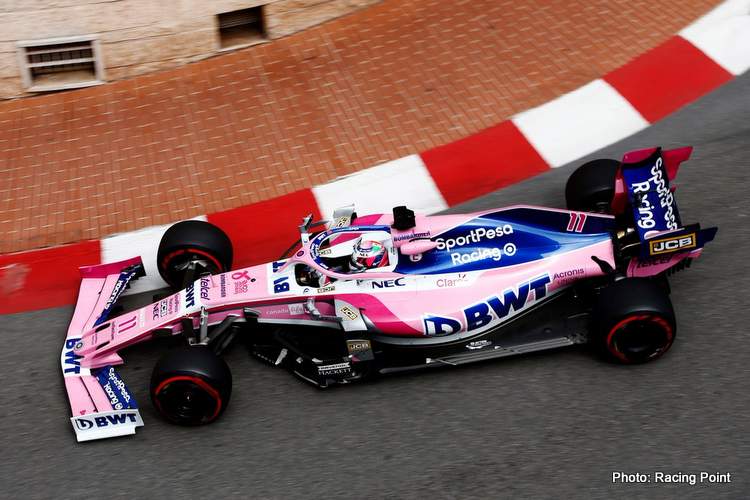 Racing Point report from qualifying day for the Monaco Grand Prix, Round 6 of the 2019 Formula 1 World Championship, on the streets of Monte-Carlo.

Sergio Perez, 17th: “We have struggled for pace this weekend and going into qualifying we knew it wasn’t going to be easy. In the end we needed a tenth or two to make the difference and progress to Q2, but we just missed out. In that sense, it’s been a frustrating day because we know how important qualifying is in Monaco and it’s usually a race all about track position.”

“The margins were small today, but it means we have a difficult job tomorrow. Considering where we will be starting the race, we have to hope for some rain to come and mix things up, otherwise it’s going to be difficult to score points. At the same time, Monaco can sometimes be unpredictable, so we will be ready to try and maximise those opportunities tomorrow.”

Lance Stroll, 18th: “It hasn’t been easy in the lead up to qualifying. We’ve been missing pace in practice and, even with the changes made to the car since Thursday, we still struggled today. It wasn’t made easier by such a busy track in Q1 and finding space for a clean lap was difficult – it’s always the case in Monaco. I didn’t get a clean run on my second attempt and that ended any chance to make Q2.”

“It’s going to be tough to score points, but let’s see what we can do, and see if the weather changes tomorrow. I think we just have to remember that Monaco is a one-off race and I don’t believe our performance today is a true reflection of the speed we have in the car. Anyway, let’s see what happens tomorrow and try and make the most of those situations that come up in the race.”

Otmar Szafnauer, CEO & Team Principal: “The margins continue to be really close across all the midfield teams and we were just the wrong side of that margin today. A few tenths would have made a big difference, but instead we end the day feeling disappointed.”

“Lance had traffic during his second run and we know how difficult Q1 is with 20 cars on track jockeying for space. Sergio had a cleaner run, but missed the cut by just over a tenth. It’s given us a big task tomorrow, but you never know what can happen in Monaco, so we will keep working hard tonight and see what the strategy options are for the race.”