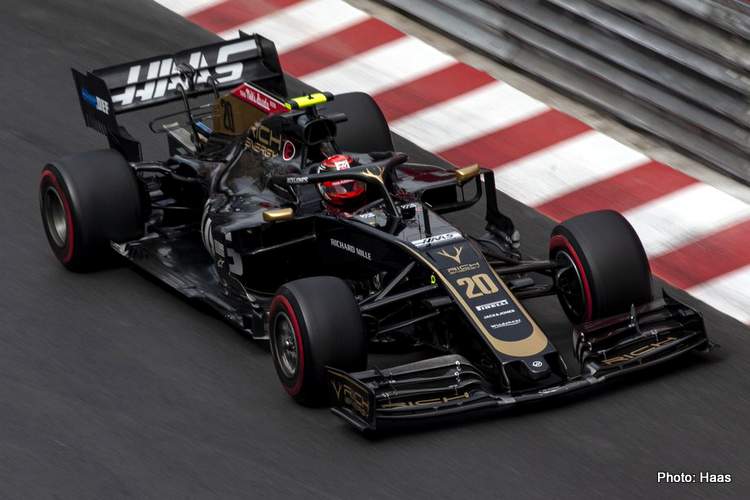 Magnussen will start the Monaco Grand Prix fifth on the grid after Pierre Gasly received a three-position penalty – having originally qualified fifth, for impeding Grosjean in turn four on the final lap of Q2.

In Q2, Magnussen turned an exceptional lap of 1:11.363 that was fifth-quickest while Grosjean was balked by Gasly on the racing line on his final flying lap and had to settle for 13th with his previous-best lap of 1:12.027. Only Magnussen advanced to Q3, his fifth appearance in the final knockout round in six races this season.

In Q3, Magnussen continued to find speed and ultimately claimed the sixth spot on the grid with his lap of 1:11.109, placing him behind a pair each of Mercedes and Red Bull entries and one Scuderia Ferrari. It was Magnussen’s best career qualifying effort at Monaco, bettering his effort of eighth in 2014.

Both Magnussen and Grosjean ran exclusively on the Pirelli P Zero Red soft tire throughout qualifying.

Romain Grosjean: “At the end, traffic cost us the chance to move into Q3. I was clearly going to crash into Pierre (Gasly). It’s not his fault, we can’t see anything with these mirrors, we rely on the radio – and I don’t think he was warned on the radio by Red Bull.”

“The same happened to me in Bahrain with Lando Norris. I’m obviously unhappy, and even though Gasly was penalized, it’s not his fault, and it’s not going to change my qualifying – I’ll start where I am, and for tomorrow, that’s a bad thing. It’s Monaco, there’s not much we can hope for as qualifying is key.”

Kevin Magnussen: “It was a really good session. I had a really good car, I could push, I felt comfortable. I put a lot of stress on the guys in Q2 with the damage to the front wing in the session after I kissed the wall, they did a fantastic job to turn it around, fix it, and send me out again.”

“I got into Q3 with a good lap, then did another one there. We know how important qualifying is at this track, so to get P6 at the front of the midfield again – the fake pole position, I’m extremely happy with it. It was a perfect job from the whole team, not just me – it was a team effort.”

Guenther Steiner, Team Principal: “A very good day on one side of the garage. Kevin (Magnussen) did a fantastic job. We couldn’t have done anything better. The team was fantastic in reacting to when he had the damaged front wing.”

“Everything was smooth, so I’m very happy and proud of that one, as can the guys. Romain (Grosjean) was impeded by Gasly – it was the wrong moment, at the wrong time, at the wrong place. He was pushed out of getting into Q3 by that, otherwise I think he would have made it in easily to Q3.”

“Overall, I think we’re happier today than upset. We start P5 tomorrow with Kevin, because Gasly was penalized, and we just need to deliver a clean race, and get as many points as possible so we can build on our tally from Spain.”