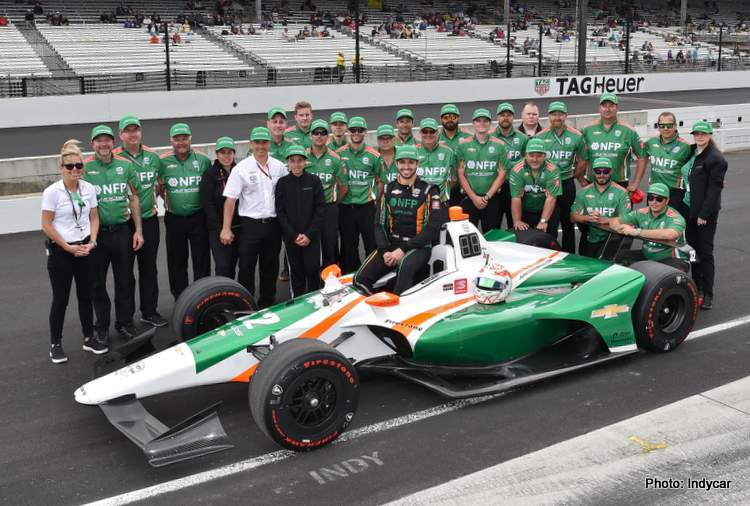 He hopes Sunday’s final chapter will be every bit as compelling.

After beating the odds during a topsy-turvy month, the 23-year-old Californian hopes to become the first driver to win the race from the 33rd and final starting spot on the grid.

“We’ve seen a lot of fairy tales at this track before,” he said Thursday at the annual media day. “Why couldn’t we see a fairytale this weekend?”

Just as practice for the 500 began last week, team owner Ricardo Juncos announced his two primary sponsors had withdrawn, leaving the side pods and chassis virtually devoid of decals.

Then just as Kaiser started getting comfortable in the cockpit last Friday, he lost control of the car and spun into the outside wall. It nearly went airborne before landing on one wheel with the tub smashing back to the track surface.

Crew members scrambled to repair the damage overnight but when Kaiser returned to the track for the first day of qualifying last weekend, he didn’t have enough speed to make the protected top 30. So the team went back to work Saturday night, giving Kaiser one final chance in the last-row shootout.

This time, on the final run of the shootout, he completed a four-lap qualifying effort with an average speed of 227.372 mph — barely ahead of Alonso’s 227.353 — putting the nearly barren No. 32 car into the race and sending Alonso and his well-funded team, McLaren Racing, home.

“It’s been such a roller-coaster ride you could chart it,” he said. “I mean even before the sponsors pulled out, I wasn’t sure if I was going to drive the car. I can’t even explain the emotions we’ve been through.”

Now, everyone seems to want to jump on board.

Since Wednesday, Juncos Racing has announced 250ok, an Indianapolis- based email intelligence platform, will serve as the primary sponsor this weekend.

Last year’s primary sponsor, insurance company NFP, has teamed up with Global Medical Response as a co-sponsor. The team also has added Hagerty, the world’s largest specialty insurer of collector vehicles and the publisher of Hagerty magazine, and Juncos, who is from Argentina, continues to work the phones with companies from his home nation for even more funding.

The result could help the part-time IndyCar team take another step toward becoming a full-time entrant.

Kaiser finished 21st in his only start this season at Austin, Texas, after making four starts in 2018 including Indianapolis. But Juncos hasn’t yet said whether the team will compete in any races this season though team spokeswoman Abby Carter acknowledged the momentum from Kaiser’s incredible run could provide the team with enough momentum to start looking beyond Sunday’s race.

But what Kaiser managed to do over the past two weeks has not been lost on veterans who have fought through their own struggles on IndyCar’s biggest stage.

“You’ve got to stay calm her because this race is all about preparation and if you’re not prepared your chance of failing is huge,” 2013 Indy winner Tony Kanaan said. “It’s really easy to lose your head here and this place can really drain your mind if you let it.”

Kaiser refused to let that happen and now he has a chance to rewrite history with a perfect ending, “I think it was the magic of May. It’s just a great underdog story and I think everyone can relate.”