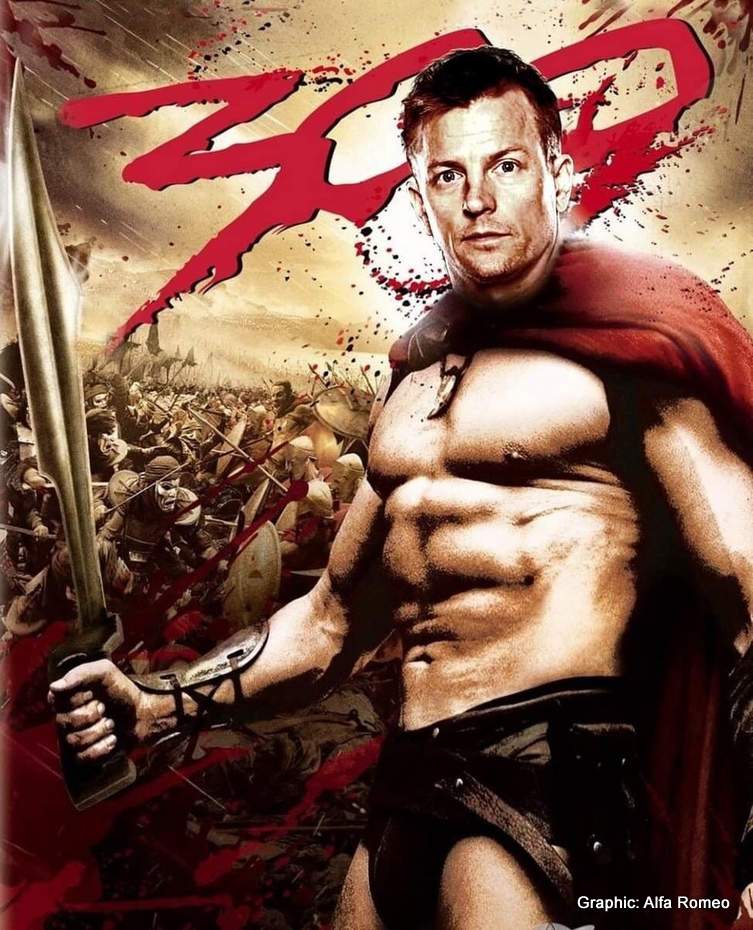 Kimi Räikkönen does not appear too excited about his 300th Formula 1 weekend which comes up with the running of this edition of the Monaco Grand Prix.

The veteran Finn was typically blunt when he said in the team’s preview, “Everyone is talking about my 300th race, but I’m more interested in our performance.”

And added, “The test in Barcelona was important for us to understand our problems better, but I honestly don’t know how good our car fits to the street course in Monaco.”

Nevertheless, 300 is a big number and puts him in fifth place on the all-time list of grand prix involvements behind Rubens Barrichello (326), Fernando Alonso (315), Jenson Button (311) and Michael Schumacher (308).

It must be noted that Raikkonen has 297 grand prix starts ahead of Monte-Carlo this weekend – a couple of times he did not start the race.

Apart from the epic tongue-in-cheek ‘300’ movie graphic they used to honour the occasion, his Alfa Romeo team also wrote of the veteran driver’s milestone occasion:

Few drivers in the history of F1 have ever reached such heady heights in terms of race entries, and next weekend will mark this important milestone for our very own Kimi Räikkönen. Yes, he had to be told.

“Driving is the only thing I like about F1”, the Iceman famously said, so it’s safe to say numbers do not mean a lot to him.

Do not expect a commemorative helmet, either.

“It protects my head”, that is all it does – how to disagree? And were F1 to organise a special commemoration on the grid before the race, well, we can only hope it doesn’t clash with Kimi’s loo break…

Like Gerard Butler’s Spartan king in the “300” movie, Kimi’s a man of few (if sharp) words. Unlike Leonidas and his heroes, who fought to keep the Hot Gates of the Thermopylae well shut, our man likes his gates open… especially on Brazil’s support paddock pitlanes (remember his off-track… search for an alternative route in Interlagos 2012?).

Mostly, and we’re really stretching this metaphor to its extremes, like the cinematic Greek warriors, Kimi doesn’t give a monkey about what others think of him (and would tell you so, in slightly more colourful words).

From his debut (in a Sauber) in Australia 2001, Kimi Räikkönen has gone on to become one of F1’s iconic characters. A winner of 21 races, he may claim 19 years in the sport (with a brief, two-year hiatus) didn’t change him… truth is, they have.

The fresh-faced boy who rocked up in Melbourne nearly two decades ago, almost missing his first race start as he was having a nap in the garage, is now a World Champion and a proud family man, husband to Minttu and father to Robin and Rianna. Professionally, he’s enjoying his driving at Alfa Romeo Racing as a relaxed, happy driver doing what he does best.

Time and experience change people. But the core Kimi, that never changes. For sure, we will never try to do so – to try and change Kimi to fit a mould is a futile exercise.

We just leave him alone. He knows what he’s doing.