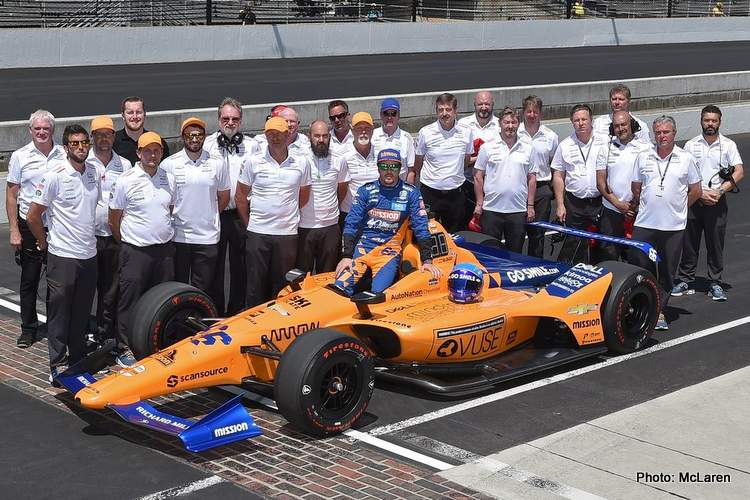 Fernando Alonso said he would be watching the 103rd Indianapolis 500 from home, and McLaren head Zak Brown told The Associated Press that his team would not be buying out another entrant to get the two-time Formula 1 champion into the race.

“We’ll come back fighting. We don’t want to buy in,” Brown said. “We want to earn it. Anyone can buy in. We want to get in on merit.”

The McLaren miss is one of the biggest failures in Indy 500 history. Roger Penske missed the show with Al Unser Jr. and Emerson Fittipaldi in 1995, a year after dominating the race. Reigning CART champion Bobby Rahal missed it in 1993, and two-time Indy winner Rodger Ward never got up to speed to make the 1965 field.

Gil de Ferran, the competition director for McLaren and a former Indy 500 winner, was gutted and apologized about a dozen times for the team’s failure. He also turned to Alonso and directly apologized to the driver during a news conference some two hours after they had been eliminated from the field.

“We didn’t give you a car that was fast enough. You drove like the champion you are. We couldn’t have asked anything more from you. I am sorry, man. You are an amazing driver,” de Ferran said. “We didn’t underestimate the challenge. We knew this was going to be a tremendously hard challenge. I’ve seen some incredible people not make the race so we certainly were very aware of how difficult this was going to be.”

Kaiser bumped Alonso by .02 mph in the “Last Row Shootout” to set the 33-driver field.

Alonso tried to watch each driver make their qualifying attempt on pit lane but was swarmed by fans and media. He began signing autographs while keeping an eye on Kaiser, but once he saw the final speed, he hopped on a waiting golf cart and was driven away.

McLaren last raced in the Indy 500 in the 1970s but is back this season to both help Alonso complete his quest to win motorsports’ version of the Triple Crown and as a feeler for a potential full-time IndyCar team.

But the entire process has been a disaster from opening day because of electrical issues, an Alonso accident, a lengthy delay in rebuilding him a car, a tire puncture on his first qualifying attempt, and, finally, a car too difficult to handle for Alonso to qualify in the top 30 on Saturday.

Incredibly disappointed for the fans, our team, our partners and Fernando that we will not be racing in the 500. It was always going to be a hard road but no excuses-we didn’t get the job done. Credit to those that did. The team put their heart and soul into it and I thank them. https://t.co/ereJ5MG5RC