Bottas: For now it’s between me and Lewis 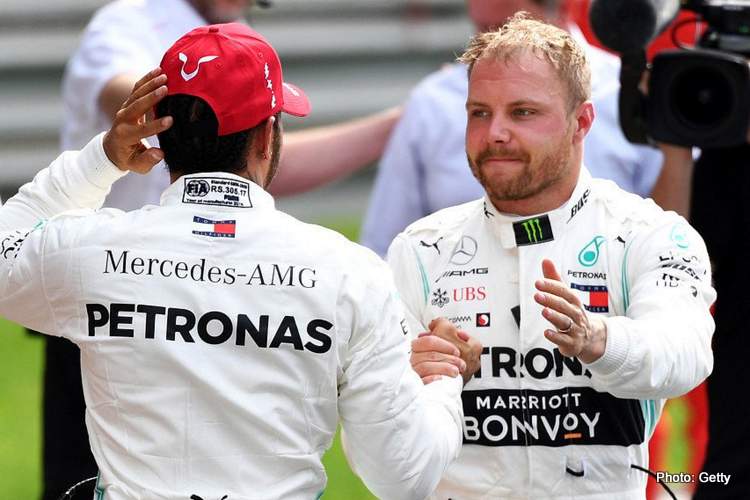 Valtteri Bottas trails Lewis Hamilton 2-3 in victories after five rounds this season, and the Finn is well aware that the world of Formula 1 depends on him to challenge his Mercedes teammate in what is fast becoming a ‘two-horse race’ between the two Silver Arrows drivers.

With Red Bull and Ferrari still playing catch-up, Bottas knows what is expected of him, “For now it’s between me and Lewis, but it’s a massively long season. There’s many teams that, especially at some tracks, are very close and it’s going to be a big development race between teams all through the season.”

“But if it’s going to be me and Lewis, every single opportunity is going to be key. That’s why Barcelona for me was annoying. I felt I worked hard for this weekend and for the qualifying… to be on pole, on this circuit where it means a lot and I lost it at the start. But that’s life and there’s 16 opportunities to go. That’s plenty.”

The 29-year-old Finn has never stood on the royal Monte-Carlo podium, and said of his forthcoming visit, “I look forward to it, Monaco next and we’ll see. I feel I’ve never in my F1 career I’ve never had a good car in Monaco.”

“It’s such a unique track, you need a very special car in terms of how it works mechanically in Monaco, with all the warps and bumps, so it’s a question mark how we’re going to perform there.”

While Mercedes romp away with this season, the W10 is proving to be even better than its illustrious predecessors, a ruthlessly efficient car through the fast bits as well as nimble in slower corners, as they proved at Circuit de Catalunya, which augers well for Monaco.

“Obviously from Barcelona, Sector 3 with slow corners, it’s promising…” he explained. “I would just hope that we have a good car there because it would be such a unique race to be fighting for the win, or win it. I’ve actually never been on the podium there so it’s something I really look forward to.”

“I’ll definitely focus 100% of the weekend for the qualifying performance and being absolutely on it in Qualifying 3, like here. I live just next to the start-finish line so it would be nice to have a good car there…” added Bottas who trails Hamilton by seven points ahead of round six, in Monaco this weekend.

Big Question: Can Valtteri beat Lewis to the title this season?