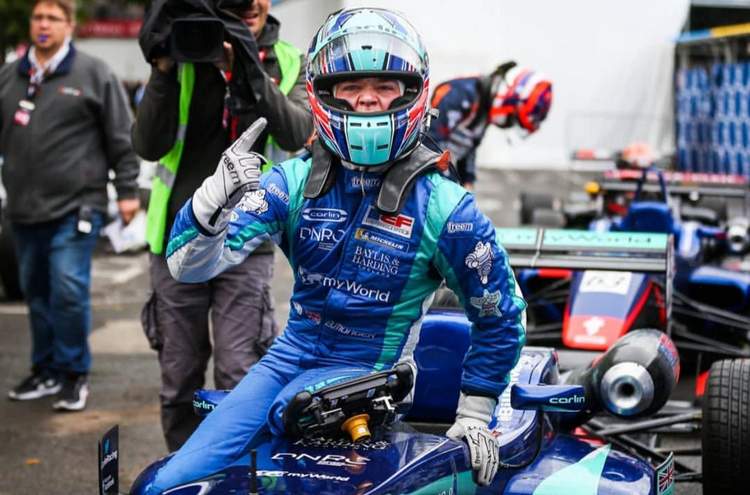 The Briton, who is a double amputee below the knees after being injured in a racing crash two years ago, qualified 11th on slick tyres but peeled into the pits at the end of the warm-up lap for wets.

He was followed in by several others, but none made the progress Monger did, who was in the lead before the halfway point of the race.

Those last two positions were gained after the leading slick-shod Motopark drivers Julian Hanses and Liam Lawson clashed, a result of Lawson trying to force a move at the tight Turn 10.

That crash also led to the safety car, wiping out Monger’s lead advantage, but he handled the restart well and then pulled away to take victory over Carlin team-mate Nicolai Kjaergaard.

Like Monger, Kjaergaard has also pitted for wets early on, and he came under late pressure from Motopark’s Yuki Tsunoda. After his team-mates crashed, Motopark finally called in Tsunoda to pit, and on the fresh rubber, he came from the bottom of the top 10 to the top two’s tails in the small number of laps he had available.

Teo Martin Motorsport’s Lukas Dunner also left his change to wet tyres too late but did the fastest lap on the way to fourth.

Christian Hahn was fifth for Carlin, ahead of Marino Sato (Motopark), Teppei Natori (Carlin) and the slick-shod Cameron Das, who did an impressive job for Fortec Motorsports staying out of the barriers despite being on the wrong tyres for a wet track.

Lawson’s retirement meant Sato has closed the gap between the pair in the standings to six points.

Many drivers crashed in the race, with Linus Lundqvist causing a three-car pile-up with two of the Teo Martin cars after misjudging the tightness of a corner. Incredibly the marshals cleared the cars without the need of a safety car intervention.