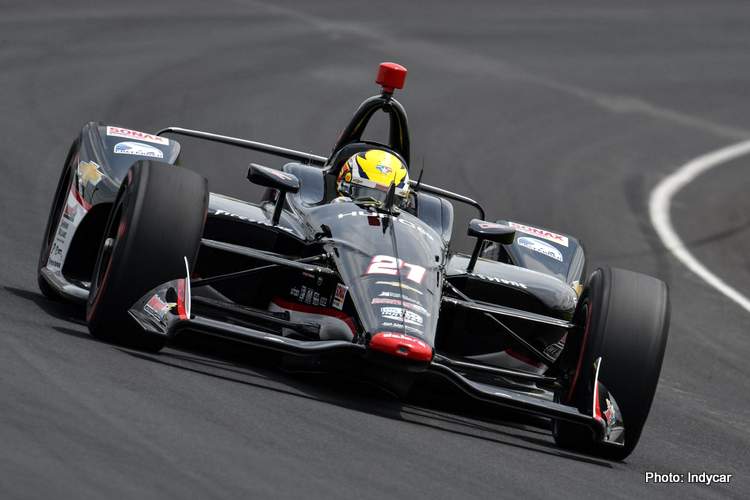 Drama, excitement, surprises, tears. First-day qualifying for the 103rd Indianapolis 500 presented by Gainbridge had it all but then, that’s become the norm for qualifying at Indianapolis Motor Speedway.

Following Saturday’s intense action on the hallowed 2.5-mile superspeedway oval, the fastest 30 qualifiers are locked into the field for the race on Sunday, May 26. The top nine advance Sunday to a shootout for the pole position. Second-day qualifying also features the Last Row Shootout that will include a pair of high-profile drivers among six who couldn’t find the speed to make the top 30.

Spencer Pigot, the second qualifier of the day in cooler conditions, had the fastest four-lap qualification attempt at an average speed of 230.083 mph on the 2.5-mile oval. The driver of the #21 Ed Carpenter Racing Chevrolet was joined in the top nine by teammates Ed Jones (sixth in the #63 Ed Carpenter Racing Scuderia Corsa Chevrolet) and team owner Ed Carpenter (seventh in the #20 Preferred Freezer Services Chevrolet). (Pigot and Carpenter are shown in the photo above.)

“I feel great,” said Pigot, whose best Indy 500 start to date was sixth in 2018. “Obviously, it’s great to be on top of the speed charts and also to have all three of our Ed Carpenter Racing cars in the Fast Nine (Shootout) for the second year in a row. Just a testament to all the work everyone does in the shop throughout the offseason and leading into this race.”

At the opposite end of the grid, Pippa Mann clung to the 30th and final locked-in position Saturday with a four-lap run of 227.244 mph in the #39 Driven2SaveLives Chevrolet for Clauson-Marshall Racing. It provided vindication for the only female driver entered in this year’s Indy 500, a year after she was one of two drivers who failed to qualify for “The Greatest Spectacle in Racing.”

“We kind of miscalculated how much better the track conditions were going to get at the end of the day,” said Mann, who secured a seventh Indianapolis 500 start.

The other driver who failed to qualify in 2018, James Hinchcliffe, is in danger of missing the show again after crashing his primary #5 Arrow Schmidt Peterson Motorsports Honda in a qualifying attempt at 1:24 p.m.

Hinchcliffe’s crew scrambled to prepare a backup car and had it on track within 2.5 hours. Without the benefit of any practice in the secondary car, the 2016 Indy 500 pole sitter made three late qualifying attempts, but none was fast enough to get the Canadian into the top 30.

“Obviously, it wasn’t quite enough today,” Hinchcliffe said. “Luckily, we’ve got a chance tomorrow. I’ve got a lot of faith in the crew, everybody at Arrow, everybody at Honda. They’ve done great today to rebound from a pretty bad situation. We just have to put our heads together, find a little speed on it tomorrow and come out and put this thing in the show.”

Fernando Alonso car in pitsAlso unable to muster a qualifying effort good enough was two-time Formula 1 champion Fernando Alonso, who made five attempts in the #66 McLaren Racing Chevrolet. The last try averaged 227.224 mph but was the final speed bumped from the top 30 by a faster qualifier.

“It has been a difficult day, and it follows a difficult week,” said Alonso, who crashed Wednesday in practice, forcing him into a backup chassis. “We were running quite well this morning (for the first attempt) when the conditions were not too bad, but unfortunately we picked up a rear (tire) puncture and then we decided to wait until this afternoon to get back out on track.

“At the end of the day, we didn’t have the pace. … I hope we can find enough to make the top three positions of the six (bidding for the last row). … If it’s not enough and we are fourth of six, it’s what we deserve.”

The drivers who qualified in the 10th through 30th positions are locked into those grid positions for the race.

Six drivers – Alonso, Hinchcliffe, Max Chilton, Kyle Kaiser, Sage Karam and Patricio O’Ward – will compete in the Last Row Shootout. Each driver will make one qualifying attempt, with the fastest three earning the final spots in the 33-car field.

The Fast Nine Shootout will follow, with those drivers each making a four-lap run in reverse order of their speeds from Saturday.

A full-field practice follows the Fast Nine Shootout, from 3:15-6 p.m. Sunday, and airs live on NBCSN.

Coverage of the 103rd Indianapolis 500 on May 26 begins at 11 a.m. on NBC. This is the first time that the network will broadcast the race as the exclusive domestic media rights partner with Indycar.

Alonso: If we don’t qualify, it’s because we don’t deserve it