It’s dubbed “Fast Friday” and the final full day of practice before qualifying for the 103rd Indianapolis 500 presented by Gainbridge was just that.

A dozen drivers turned laps in excess of 230 mph as teams dialled in their NTT IndyCar Series cars for the emotional next two days when the 33 grid positions for “The Greatest Spectacle in Racing” will be determined.

It was the first time in four practice days that anyone exceeded the 230-mph mark.

“I’m just super thankful to be here, honestly,” said Daly, a veteran of 39 career NTT IndyCar Series starts, whose only scheduled race this season currently is the Indianapolis 500. “It’s incredible to be a part of this team.

“I’ve been super happy with my group and our engine and our car. We’re just (taking it) step by step, one change at a time – trying to make this thing go as fast as possible – and we’ll see what happens tomorrow.”

All 36 entered cars benefited from an extra 1,000 millibars of turbocharger boost that increased engine output by some 50 horsepower Friday and through qualifying weekend. While most of the fastest laps were also aided by an aerodynamic tow from a leading car, Ed Jones did eclipse the 230 mark with a no-tow lap of 230.106 mph in the #63 Ed Carpenter Racing Scuderia Corsa Chevrolet.

While they were jockeying at the top of the speed chart, two-time Formula 1 champion Fernando Alonso spent the day regaining his footing with his first time on track since crashing in Wednesday practice.

The Spaniard totalled 77 laps on the day – the most of any driver – in the backup #66 McLaren Racing Chevrolet, with his final circuit of 229.328 mph on the 2.5-mile oval standing as his best and 24th among all drivers.

“It was a positive day for us,” Alonso said. “We were able to put the car on track and try different directions on the setup and learn a little bit about the track and the day. Obviously, the boost was up today, so the speeds were higher and it was more a (qualifying) preparation than race setups.”

“But we had a lot of new tires (unused) from the last couple of days, so we were able to do a lot of runs. Hopefully, that information will give us tomorrow a little bit of confidence into qualifying.”

Daly’s day got even better when his team drew the first spot in the qualifying order for his entry. It means the 27-year-old Indiana native and son of former Indy car and F1 driver Derek Daly can make his initial four-lap qualifying attempt in potentially the coolest, best conditions of the day.

Kyle Kaiser was involved in the only incident of the day when his #32 Juncos Racing Chevrolet made hard contact with the SAFER Barrier in Turn 3. The 2017 Indy Lights Presented by Cooper Tires champion was uninjured. The car sustained heavy damage and the Juncos crew expected to work into the night to repair it in a bid to qualify on Saturday.

A final pre-qualifying practice begins at 8 a.m. ET Saturday (livestream on INDYCAR Pass on NBC Sports Gold) and is split into three parts – 30 minutes for half the qualifying order, 30 minutes for the other half and 30 minutes open to all cars.

First-day qualifying runs from 11 a.m.-5:50 p.m. Saturday, with the fastest 30 drivers at the end of the day securing a spot in the race. Drivers may make as many qualifying attempts as they wish, weather and time permitting. Grid positions 10 through 30 are locked in then, while the fastest nine drivers on Saturday advance to the Fast Nine Shootout.

Sunday’s qualifying conclusion features the Last Row Shootout at 12:15 p.m., where each driver who failed to qualify on Saturday makes one attempt, with the fastest three earning the final spots in the 33-car field.

Following that comes the Fast Nine Shootout at 1:15 p.m. to determine the pole sitter and grid order of the first three rows.

The Indianapolis 500 airs for the first time this year on NBC, with race coverage starting at 11 a.m. Sunday, May 26.

There’s a new qualifying format at the #Indy500 this year. Who do you think will come out on top? 🤔 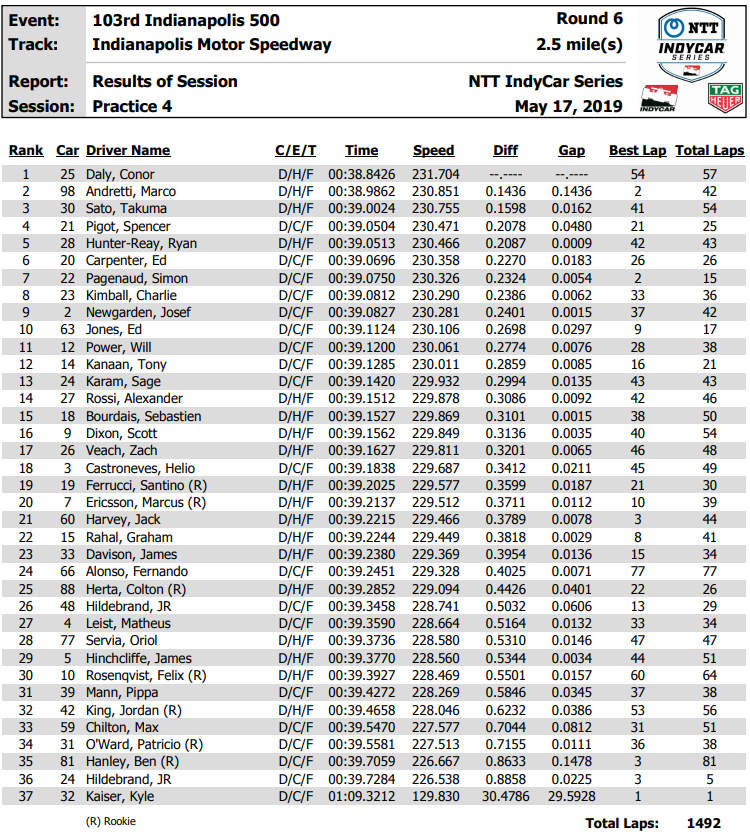