Alonso: I am worried but it’s the same for everyone 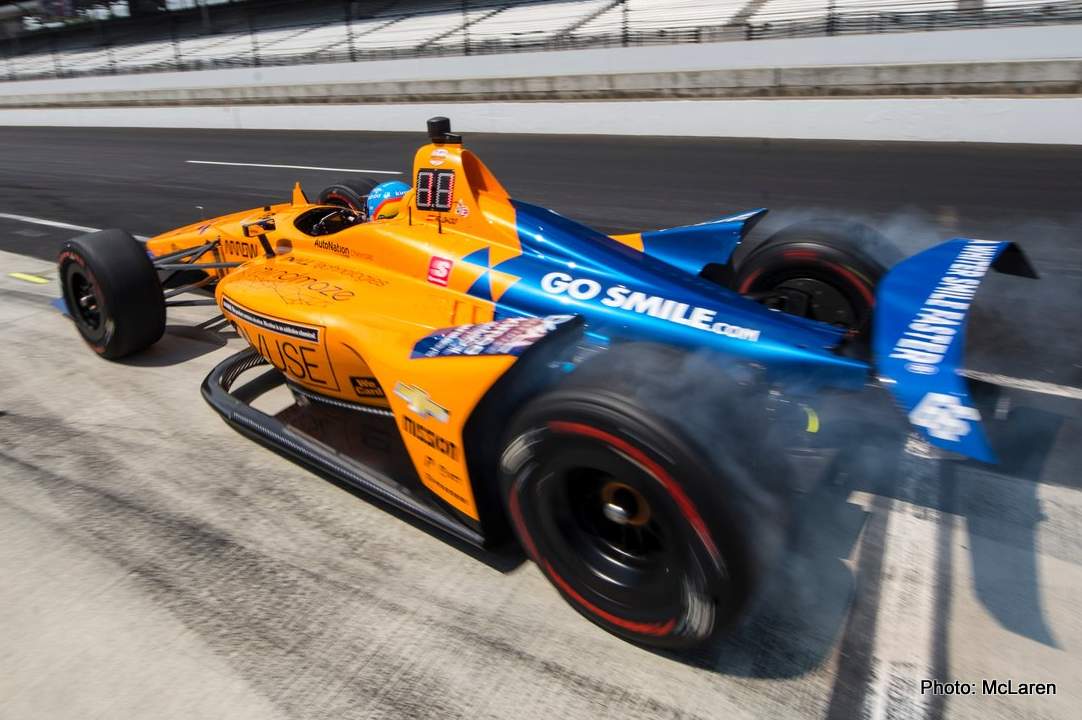 It looked so easy two years ago when Fernando Alonso thrilled fans and media Stateside during his rookie foray to the fabled Indianapolis 500, but this year with McLaren the Spaniard is finding out why the Brickyard is such a hallowed yet unforgiving shrine.

It’s been a torrid week of practice for the McLaren Indycar start-up, with electrical issues costing Alonso valuable track time on the opening day of practice, then a crash on day two further compounded matters as the team lost a full day (Wednesday) to prepare the back-up Dallara for action.

But by the end of Friday, he was 30th of 36 on the no-tow speed time sheets which puts him in the danger zone to make it into the top 33 runners that will qualify today (Saturday) for the race on 25 May.

Furthermore, the quali run order draw was also unkind to Alonso who will be sent out 20th to do his qualifying run which will be later in the day than most, when conditions may not be as ideal as they are expected to be for the early qualifiers.

Asked if he was concerned with his lowly run order, Alonso admitted, “I am, but I think it’s the same for everyone. … When you will do the run is going to be a big factor if it’s a hot day. So yeah, if we are in the wrong moment of the day… it seems that the luck will put us in that moment this week.”

On Thursday he was forced to watch as his team built a backup car while full day of running went begging.

“It was definitely frustrating,” Alonso recalled. “I cannot lie to you, but today was a positive day. We had a lot of new tyres from the last couple of days, so we were able to do a lot of runs and hopefully, that information will give us a little bit of confidence into qualifying.”

McLaren sporting director Gil de Ferran – the Indy 500 winner in 2003 – added, “I think in the situation we find ourselves it’s important to stay calm and continue to improve the car little by little. As Fernando said, it was frustrating for everyone but today we got it back together. Fernando did a great job. The crew did a good job. We’re stepping through it and getting better together.”

Tackling the 103rd running on the Indianapolis 500 was always going to be a tall order. Granted McLaren has pedigree at the world’s most famous oval, winning the race three times in the seventies as a constructor.

But these are vastly different times and that’s why Alonso’s much heralded 2017 foray with Andretti Autosport might have made it all look easy but, now, in retrospect it is proving to be huge ask for a rookie outfit – which McLaren are – to do the business.

Imagine a brand new F1 team running only one Grand Prix – for argument’s sake Monza – and expecting to win. Although Indycar is a far more level playing field (and a whole lot cheaper to do one race!) the reality is you are still up against Indycar’s mega-teams who know the place inside out.

De Ferran acknowledged, “We’re a new crew and we respect this place a lot. So we wanted to make sure that we put the car together the best way possible.”

“Obviously that took longer than we expected, and I guess having been here before, I’m very aware … I was very aware of the importance of being out on the racetrack, both from Fernando’s perspective and for the development of the car.”

“But, as I said earlier, even under those circumstances, I also know it’s very important to keep your cool, you know so that you don’t make bad decisions going forward,” added De Ferran.

While this past week has been packed with challenges for the new outfit, another reality of the Indy 500 is that if you are on the grid for the race you are in with a chance. After that, as much as the race is a gruelling test of driver and team, it is also a lottery.

Provided a driver and team get through all the pitstops, safety car periods, the perils of high-speed close combat and stay in touch with the leading pack throughout the first 180 or so laps then, in the final 20, there is a chance Alonso could snatch the one victory that will put him up with Graham Hill as the only two men to conquer the Triple Crown of Motorsport.

It is worth remembering that two years ago in the race he was in that exact position, leading and running with the leaders at the sharp end of proceedings until the Honda on his orange car went up in smoke. But it means he has been there, done that – a fact that could serve him well if he is among the ‘chosen’ in the final stages of the race.

However, to get to that point in two Sundays time is still a long journey and anything can happen.

Big Question: What does Fernando need to do to win this years Indy 500?