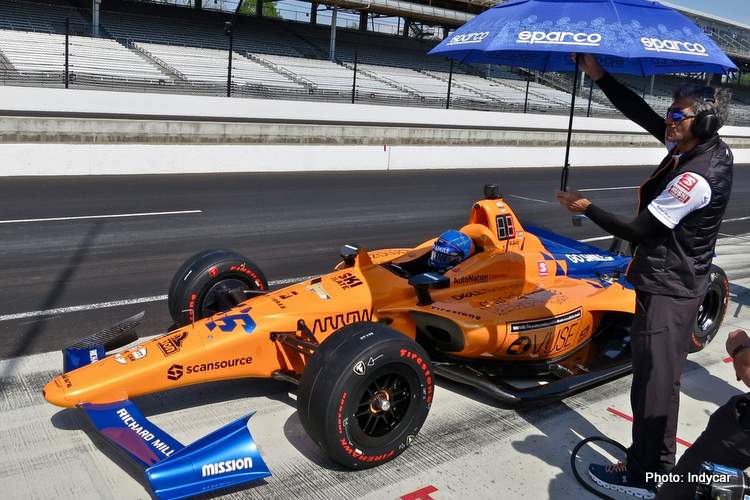 On paper it was fantastic for all concerned, McLaren taking on the Indianapolis 500 as a defacto team in a quest to take their adopted superstar driver Fernando Alonso to the last leg of his Triple Crown of Motorsport quest with talk of a full Indycar foray as early as next year.

But the Brickyard is no walk in the park, it is the stuff of legend and also arguably the most dangerous race track on which open-wheelers race. A testament to the three jaw-dropping crashes so far and the ever present fact that 42 drivers have perished at the place.

Perhaps the first foray back in 2017 with Andretti Autosport made it look easy: setup a team Stateside with a F1 veteran in charge, buy a Dallara, paint it orange, strap Alonso into it and start writing the headlines.

But McLaren’s and the Spaniard’s return to Indianapolis has not been an easy one, technical issues cost them valuable track time on day one of practice while a high-speed crash a day later wrecked his car. The team lost Thursday as they prepped another car for Alonso and repaired the wrecked chassis to serve as a spare.

Despite the setbacks McLaren sporting director Gil de Ferran is intent on instilling a sense of calmness amid the unexpected turn of events, “Avoiding panic is essential to the recovery process. That’s literally the most important thing.”

Speaking to IndyCar.com the Brazilian said, “We’ve been dealt a hand. These are the circumstances we have to deal with, and we have to deal with them in a calm and determined manner. That’s the whole thing. It happened. We have a great group of guys who are working super hard. We’ll see what happens. We’ve got to put one foot in front of the other.”

Alonso admitted to a mistake that resulted in the spectacular crash as he understeered into Turn 3, slammed the wall, became a passenger as the Dallara skitted across the infield and across the track to end up in th Turn 4 wall. It was a big one.

Alonso told NBC afterwards, “I lost completely the front aero. The wall came too close and too quickly. Unfortunately, it happened today. We will lose a little bit of running time again. I’m sorry for the team, but we will learn and hopefully we will come back stronger tomorrow.”

The problems began when electrical gremlins cost him time on Tuesday, day one of practice, and only did 50 laps while his rivals did north of 100 laps. A day later he had 46 laps on the board before he crashed. Again, most drivers did double that and more. No running on Thursday was yet another blow to their programme.

De Ferran conceded, “There’s no denying that the last two days have put a dent in our preparations – not only car preparation, but the setup development. It’s no secret to anyone that at Indy it’s important to have a slow, steady evolution of the setup of the car. When events like this happen, you put a wave in that steady evolution.”

This compares to Alonso’s to his rookie year in 2017, when he was always among the pacesetters during practice for the race, before qualifying fifth and leading 27 laps before a Honda blowup with the finish insight ending the dream that day.

The car wrecked was assembled at Woking, while the backup was built at Carlin’s workshop and tested by Alonso at Texas Motor Speedway last month.

De Ferran added, “You never want to plan for a crash, but in a way, you have to. We tried to the best we could to have both cars as well prepared as we could coming into the month of May. It’s been a tremendous amount of work by everyone coming into this month. We have a clear direction of where we need to take the setup of the car.”

Just one more day of practice remains before qualifying for the 103rd Indianapolis begins this Saturday.