Verstappen: We’re not better in any corner than Mercedes 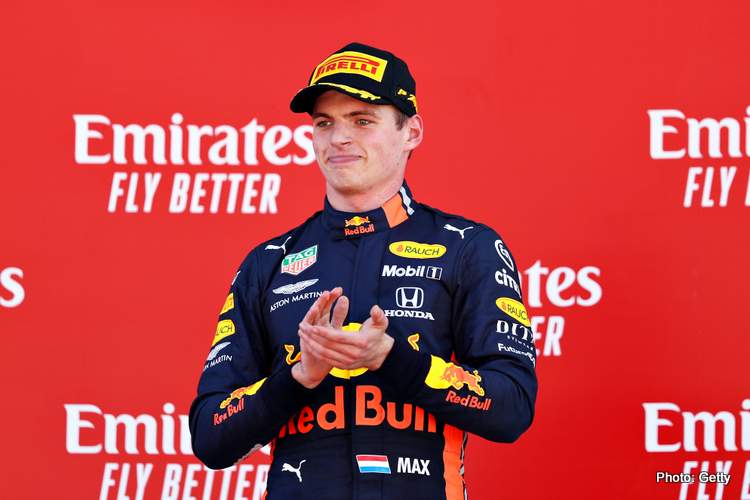 Max Verstappen may have beaten Ferrari fair and square at the 2019 Spanish Grand Prix on Sunday, but the Red Bull driver found little solace in the accomplishment on a weekend in which Honda, despite remarkable progress, still did not have the horsepower to match their all-conquering rivals in silver.

In qualifying, with everything maxed out for Q3, Verstappen was nearly a second shy of the pole-winning time set by Valtteri Bottas and, the next day in the race, he simply could not hang with the Mercs in the first phase nor the late (post-safety car) second phase of the race

Speaking to the official F1 website, Verstappen was typically frank when asked about the deficit, “I think at the moment, we’re not really better in any corner than Mercedes. [Our car is] good! It’s not that it’s a bad car – but at the moment, Mercedes is just a bit quicker than us everywhere.”

“Medium-speed, high-speed is pretty similar I would say but again, that depends on downforce levels you’re running every single weekend so it’s a bit difficult to say. But clearly [in Barcelona], they were very strong in the low-speed corners and that is normally pretty good for Monaco as well.”

With the sport’s most glamorous race next up on the schedule, it would not be foolish predicting that the Red Bull (in Verstappen’s hands) will thrive around the narrow confines of Principality’s streets, but not so according to the Dutchman.

“For Monaco, I think at the moment, looking at the low-speed performance in the last sector [at Circuit de Catalunya, we are clearly not the favourite. I don’t expect it to be like last year when we were super-strong in Monaco,” added Verstappen with reference to Daniel Ricciardo’s victory there last year.

Last year he had a disappointing weekend when pole for him was very likely, but strutting his stuff a tad too much he wrecked his car late in FP3. With extensive repairs required it was a lost cause as he was forced to watch qualifying from the pits while mechanics toiled away.

Starting from the back, his race was compromised before it even got started. He finished the race in ninth. So this year expect him to go hunting for redemption, provided Honda can dig deeper and snag a few more horses from their rapidly improving PU package.

Big Question: Will Mercedes dominate in Monaco as Max predicts?

Verstappen: I want to win but that is not achievable now