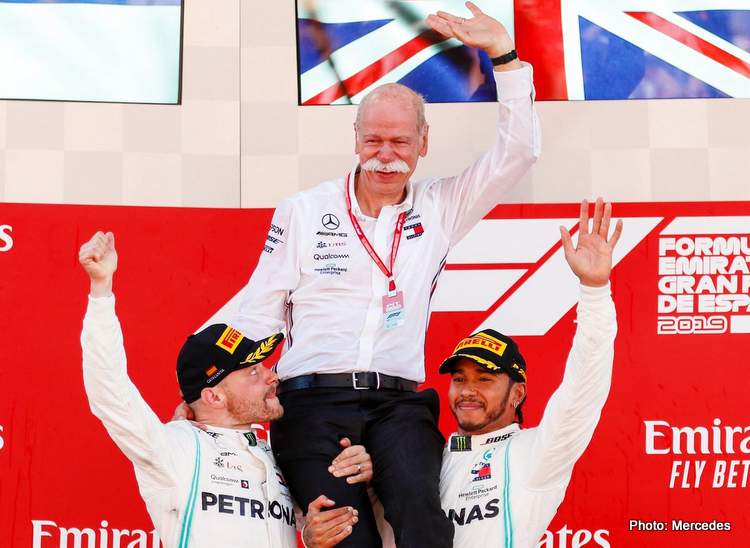 Formula 1 managing director of motorsports, Ross Brawn looks back on the Spanish Grand Prix in the wake of yet another Mercedes steamroller making it an unprecedented five wins in the first five races of the season.

The Silver Arrows can do no wrong at this early stage of the contest, setting a worrying scenario that this championship could be done and dusted by the summer break.

Nevertheless, we run these pieces verbatim as they provide insight into how the men running our sport are seeing things from their lofty perches and providing insight into where the sport is going at a time when one team is doing all the winning with no end in sight.

Here is what Ross had to say after the race weekend in Barcelona:

“Apart from their points tally, what was really impressive at the weekend was the Silver Arrows’ technical superiority on a track that is widely believed to produce a true picture of the pecking order on the grid due to the characteristics of its layout, and also due to the fact that the circuit is the preferred winter testing ground of Formula 1, when the race eventually comes to Barcelona it highlights the steps in development made by the teams. And it’s in this latter area that Mercedes have really demonstrated their strengths.

“So, is that it then, championship over bar a battle between the two team-mates at the Anglo- German team? I don’t think so as there are still a lot of races to come, but it’s true to say that Mercedes have laid down a strong early marker on both championships.

“This race was the last to be attended by Dieter Zetsche in his role as Mercedes CEO and it’s hard to imagine a better way to say goodbye to a man to whom the team owes so much. I had the honour of knowing him when we started out on the road that has taken Mercedes to the top in Formula 1 and I know how much passion and effort he invested in the team to ensure it had everything it needed to win. I take this opportunity to offer him my congratulations.

“Mercedes’ updates appear to have been a significant step forward but it seems one can’t say the same of Ferrari. Listening to the comments of its drivers and of Team Principal Mattia Binotto, the updates introduced in Barcelona produced the expected results, but not with the same impact as those of their arch-rivals.

“In such a competitive sport it’s not enough to simply progress, you have to do so at a pace that outguns rivals who are often already one step ahead and pushing on with further upgrades. You are aiming at a moving target, the bar is raised every day and it requires ever more effort to catch up.

“I can understand the frustration surely being felt today in Maranello. They are working hard, even bringing forward developments originally scheduled for later in the campaign, but still they come to the track and realise that not only have they not closed the gap, it’s grown.

“I’m definitely not going to give Mattia any advice. He knows what he’s doing, as he’s already experienced this sort of situation during his long career in Formula 1. A new cycle has begun at Ferrari and it’s partly from difficult situations such as this one that one learns and improves, because sometimes the cold shower of defeat produces a quicker response than the warm comfort zone of reasonable results.

“Fernando Alonso’s departure from Formula 1 at the end of last season left Carlos Sainz as the only man on the grid flying the Spanish flag, and I was pleased to see him show real grit and quality to take eighth place in front of his home crowd on Sunday.

“Eighth might sound like a poor return for his efforts but the unfortunate fact is that unless something unexpected happens, the top six places are generally out of reach, as they are monopolised by Mercedes, Ferrari and Red Bull.

“However, I am always pleased to see the intense passion shown by the drivers and teams behind the top three as they battle for bragging rights in the midfield. Carlos produced a great example of that, much to the delight of the crowd at the Circuit de Barcelona-Catalunya.

“After a somewhat tricky start to the season, Carlos has reeled off two consecutive points finishes that have seen McLaren establish a five-point lead over Racing Point in the fight for fourth place, which is the most they and the other midfield runners can aspire to.

“It might be a spectacular fight, but I’m aware that the battle for the lower places does not generate much enthusiasm from the fans. That’s why we have to ensure that in the future Formula 1 can have as many teams as possible fighting for victories. We are working on it.

“The Spanish Grand Prix was the best race of the season so far for Haas. After winter testing, the American team seemed to be one of the strongest contenders for fourth place, but they drew a blank in the early races, despite the positives of qualifying in the top 10 seven times.

“In Spain, a good Saturday showing of P7 and P8 was reflected in their Sunday performance and both drivers finished in the points, with Kevin Magnussen seventh and Romain Grosjean 10th.

“It’s a good start to the European season for Guenther Steiner and his crew, who move up two places in the championship to sixth in the Constructors’ Championship. No doubt the Italian Team Principal would have held his breath as his drivers gave no quarter during a thrilling intra-team battle. The fight was furious but luckily passed without terminal damage to either car, and I gather there was a need for Guenther to clear the air afterwards. Great stuff. If there’s a team that can usually provide some excitement, then it’s Haas.

“Today marks an important moment for Formula 1, with the announcement of the return to the calendar in 2020 of the Netherlands’ Zandvoort circuit that was part of the history of this sport up to the mid-1980s.

“It also marks the return of grand prix racing to a country that is enjoying a new wave of enthusiasm for Formula 1, thanks to Max Verstappen. I’m sure the Red Bull driver can’t wait to race at home, even though there is already a sea of orange waiting to greet him at most European venues.

“So, next year we will have a brand new venue in the shape of Vietnam and the sport will return to one of its historic venues. In a way, this reflects our strategy of expanding Formula 1 to new territories, while maintaining its established roots in its birthplace, Europe.

“I have fond memories of attending F1 races at Zandvoort during the ’70s and ’80s when we discovered the ground effect phenomena and applied it to the cars, achieving ever-increasing levels of downforce. Seeing those cars tackling a corner such as Tarzan was truly spectacular.

“The track and infrastructure are being modernised to meet FIA safety standards and the paddock is being rebuilt, but I believe that Formula 1’s teams and fans will really appreciate the historic atmosphere when we go there next year.”