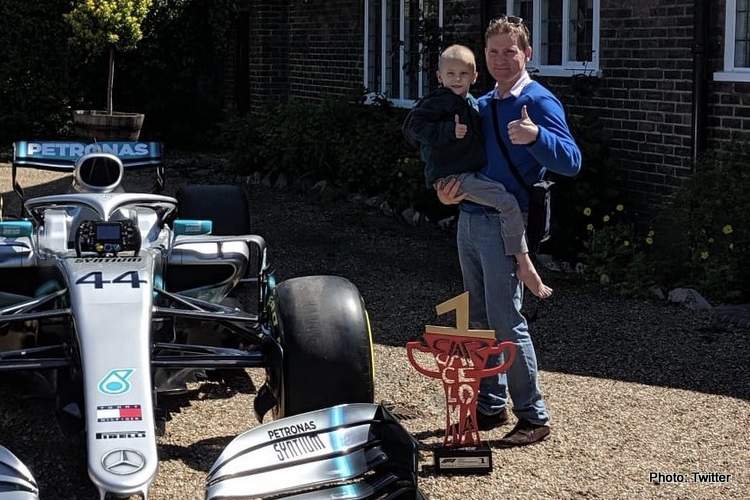 Mercedes are proving to be not only awesome on-track but the Formula 1 World Champions astounded all by delivering the Spanish Grand Prix winning car and Lewis Hamilton’s race-winner trophy to Harry Shaw.

In a gesture that has no precedent, Mercedes arrived at the youngster’s home surprising the neighbourhood to the delight of young Harry and plonked a Silver Arrows in the yard!

5-year-old Harry has Ewing’s sarcoma, a cancerous tumour that occurs in bones or soft tissues, such as cartilage or nerves.

On Sunday after winning the race in Barcelona, Hamilton revealed, “I just had a really nice message from a young kid who is suffering with an illness.”

“We had sent him a card and a cap and I saw that today before going into the race. I was chilled but I was looking for something for inspiration, something to grab onto, so I dedicated today’s race to him.

“You try to go out there and do something for someone and it doesn’t always turn out as well as it has, but nonetheless it has, so I hope he’s watching and I’ll be sending him a message shortly after this, that he’ll get, and we’re going to try to do something special for him.”

The team then went a step further with a touching gesture that deserves applause as they can do no wrong no matter what they touch. Mercedes made F1 proud today.

Harry’s father, James Shaw, told BBC, “I don’t know Lewis, but I think what we’ve seen is what a genuine, decent, lovely person he is. That was a heartfelt message he did and he won that Grand Prix for Harry and that means a lot.”

Harry’s mother, Charlotte Shaw added, “It’s brought smiles into his life at a time when there’s a limited amount of fun to be had, to be perfectly honest.”

Another crazy day! Harry is holding @LewisHamilton 🏆and a @F1 @MercedesAMGF1 is parked on the drive! #letsjustgetitdone and raise money for children’s cancer research @royalmarsden while Harry still can. https://t.co/W5NQ9Mz4XI #wenevergiveup @CanucksFIN @NataliePinkham pic.twitter.com/Z6BYg7MfZg