Honda: Satisfying to get a podium with our new updates 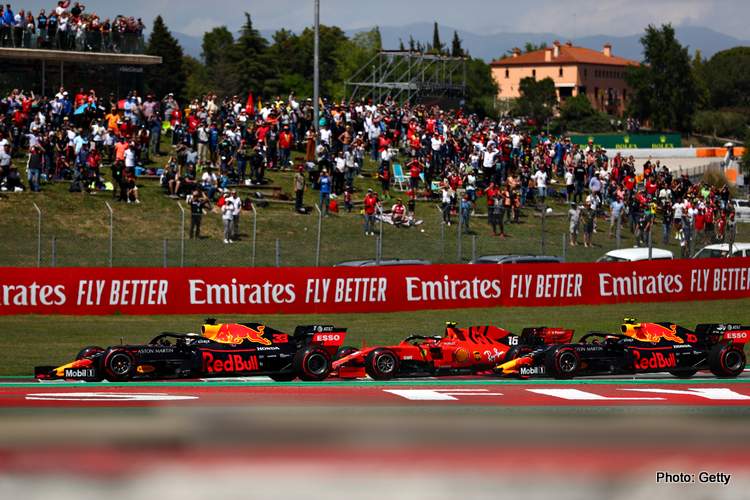 The Spanish Grand Prix yielded the second podium of our partnership with Aston Martin Red Bull Racing and three of the four Honda-powered cars scored points in Barcelona.

Starting from fourth on the grid, Max pulled a brilliant move around the outside of Sebastian Vettel at Turn 3 on the opening lap to move up to third, and an aggressive two-stop strategy saw him switch to another set of new soft tyres early on before fitting mediums later in the race.

In the second stint, Max stayed close to Valtteri Bottas and had his sights set on fighting for second place until a late Safety Car – just after his second stop – allowed others to pit for fresh tyres and bunched up the pack. Defending from Vettel initially, Max chased Bottas to the flag to secure his second podium of the season.

Pierre also delivered a strong drive to ensure both Red Bulls finished in the top six. In contrast to Max, Pierre switched to medium tyres for the second stint and then softs during the Safety Car, allowing him to attack Charles Leclerc for fifth on the race restart.

Having failed to make a pass, an excellent bit of defending against Kevin Magnussen kept the Haas at bay and secured sixth place. Toro Rosso also scored points for the fourth time in five races, with Daniil picking up two points in ninth.

Starting from that same position, Daniil was having a strong race chasing down the two Haas cars – getting ahead of Magnussen – but lost out under the Safety Car and dropped to tenth before a good move on Romain Grosjean late in the race moved him back up.

Alex came agonisingly close to making it points for all four cars, having also been running in the top ten before the Safety Car. With so many drivers pitting during that period, Alex dropped out of the points and spent the final few laps attacking Grosjean for tenth but was unable to find a way through.

Toyoharu Tanabe, Technical Director, Honda F1: “It was satisfying to get our second podium finish of the season in the race where teams brought updates.”

“For a while it looked as though we might get all four of our cars into the points, but in the end, we just missed out on that, which was a shame, as Daniil and Alex had performed really well all weekend and the Toro Rosso car was again competitive in the midfield.”

“Now we must simply carry on working as hard as possible with the aim of getting even better results in the coming races, maintaining the momentum we had here.”