From Luca’s Desk: Yet another show of strength from Mercedes 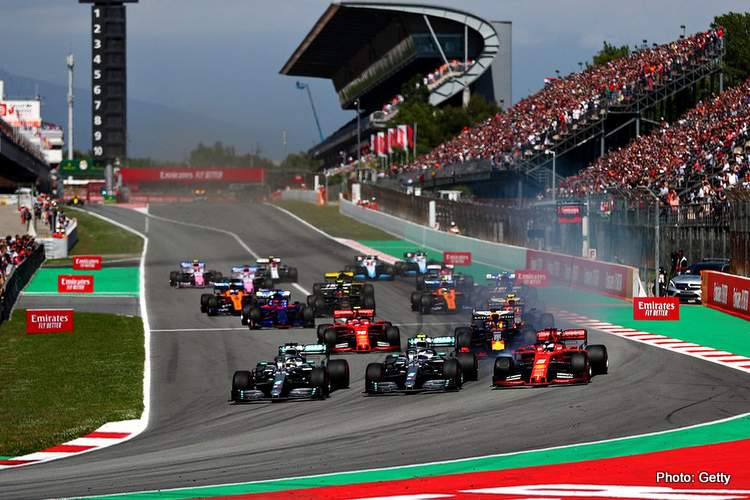 Yet another show of strength from Mercedes AMG Petronas Motorsport, which took its fifth consecutive one-two finish of the season today. The winner of the Formula 1 Emirates Gran Premio DE EspañA 2019 was Lewis Hamilton, for whom this was win number four at the Barcelona-Catalunya circuit, his third in a row.

The reigning world champion also took the extra point for setting the fastest race lap and with 26 points, he is back in the lead of the championship, seven points ahead of team-mate Valtteri Bottas (112 to 105.)

Scoring his second third-place finish of the year was Max Verstappen, who finished ahead of fourth-placed Sebastian Vettel with Charles Leclerc fifth. It’s the second time this season that Ferrari failed to get a car into the top three, after the opening round in Melbourne.

As was the case at the previous race in Baku a fortnight ago, once again the key moment was the start.

Hamilton got away from second spot on the grid better than Bottas from pole, got alongside the Finn and then overtook him going into the first corner. At the same time, Vettel tried to go round the outside, but he locked up the front right wheel and went slightly wide off track.

The German then moved across in front of his team-mate Leclerc, pushing towards the inside at the exit of the following turn, but left room on the outside of Turn 3, where there is usually more grip, which allowed Verstappen to snatch third place.

From then on, the top three places hardly changed, apart from during the usual run of pit stops. However, behind this trio the picture was less clear as to which Ferrari had the upper hand. During the first stint, it seemed clear that Leclerc was slightly quicker than his team-mate, who was hampered by a flat-spotted tyre as a result of his duel with Bottas.

Vettel let his team-mate by and then pitted earlier than planned on lap 19, to fit the Medium tyre, while Leclerc went for a longer stint to lap 25, before fitting Hards.

In the meantime, Verstappen came in on lap 20 to fit another set of Softs, with the two Mercedes drivers, having easily pulled out a good lead on the field were able to stop at the right moment, by which time Hamilton had carved out a bit of a gap to Bottas, on lap 26 for the Finn and the following lap for the Englishman, both fitting Mediums.

Once the situation had settled down, only something unexpected could shuffle the pack and it came on lap 45, after Lando Norris (McLaren F1 Racing) and Lance Stroll (SportPesa Racing Point F1 team) collided between Turns 1 and 2 leaving both cars beached off the track which required the appearance of the Safety Car.

That closed up the field, but at the restart, the Mercedes duo still had the upper hand and easily pulled away, with Hamilton and Bottas enjoying themselves, trading times in a duel for setting the fastest lap.

Therefore for the second time this season, the Silver Arrows came away with the maximum possible number of points (44) creating a real void between themselves and their closest pursuers in the Constructors’ Championship, having a 96 point lead over Scuderia Ferrari.

In the Drivers’ table, third-placed Max Verstappen trails the leader by 46 points. If the first race on European soil this year was meant to produce a clear picture of the current pecking order, it is now clear that Mercedes, showing an impressive dominance especially on the technical front, has already placed a marker on both titles.

Behind the top three teams, there was yet another entertaining battle with some spectacular action, like the duel between the Rich Energy Haas F1 Team drivers, with Kevin Magnussen eventually getting the better of Romain Grosjean for seventh place.

The French Haas driver also tussled at length with local hero Carlos Sainz who took eighth place, much to the delight of the 87,511 spectators who turned up today. Over the whole weekend the crowd figure was 160,428, while Paddock Club ticket sales were up 8% on last year.

Grosjean did finish in the points, fending off Alexander Albon, to score for the first time this year, which is not an accurate reflection of the team’s potential. In ninth place was the Thai driver’s Red Bull Toro Rosso Honda team-mate, the Russian Daniil Kvyat.

In the FIA Formula 2 Championship Sprint Race, it was Dutch delight for Nyck De Vries who claimed a stylish first FIA Formula 2 win of the season in the Sprint Race, at Barcelona, Spain. The ART man took the lead inside 10 laps after a surging start, to finish ahead of UNI-Virtuosi’s Luca Ghiotto who won a late duel with third-placed Callum Ilott of Sauber Junior Team by Charouz.

Race 2 of the FIA Formula 3 Championship saw Jehan Daruvala make it back-to-back wins for Prema Racing in Spain, after an eventful FIA Formula 3 Race 2 at the Circuit de Barcelona-Catalunya, finishing on top after a dominant drive ahead of Hitech Grand Prix’s Jüri Vips and Niko Kari of Trident.

The result sees Shwartzman become the early leader in the Drivers’ Championship after Round 1 with 37 points. Lundgaard is second with 24, and Daruvala third by just one point with 23. Armstrong and Vips follow with 21 and 20 points respectively.

Prema Racing leap to an early lead in the Team’s Championship, taking 81 points from the first event of the season, 32 points ahead of ART Grand Prix in second with 49, with Hitech Grand Prix occupying third place with 20 points. France will host Round 2 of the FIA Formula 3 in June 21-23