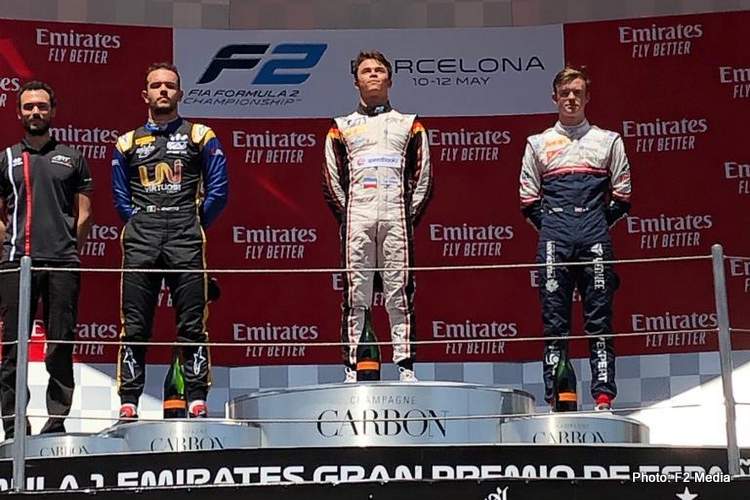 Nyck De Vries made a big statement – in the wake of being shunned by McLaren – when he claimed a stylish first FIA Formula 2 win of the season in the Sprint Race, at Barcelona, Spain.

The ART man took the lead inside 10 laps after a surging start, to finish ahead of UNI-Virtuosi’s Luca Ghiotto who won a late duel with third-placed Callum Ilott of Sauber Junior Team by Charouz.

An all British front row was thrown out the window when the lights went out as the pink BWT Arden of Anthoine Hubert squeezed through the middle of poleman Ilott and second-placed Jordan King. The Frenchman was tailed by De Vries who made the same move and latched onto P2 from P4 on the grid. Meanwhile, Feature Race winner Nicholas Latifi lost P8 to Sean Gelael who glided past him at the start.

A safety car was deployed before further scuffles could ensue, as the Carlin of Nobuharu Matsushita went up in the flames. The marshals were quick to put out the fire and the Japanese driver dashed away unscathed.

De Vries hinted at what was to come when the green flag was shown as he went for P1 down the inside of Hubert, but he couldn’t make it stick after the Frenchman defended stubbornly.

The Dutchman reacted with a fastest lap and moved into DRS range of Hubert, as just 0.5s separated the two men. He waited patiently for the long main straight of the circuit and pounced, flying to the right of Hubert and around the inside of Turn 1 – there would be no defence this time.

Ghiotto and Jack Aitken went within a hairbreadth of one another: the Italian made a move on the Campos racer to claim P6. In the meantime, Guanyu Zhou soared past King for fourth. Ghiotto rapidly closed in on King and was able to snatch fifth from the Brit.

At the front, Ilott – who had started on reverse grid pole – gained revenge on Hubert and slipped past the Frenchman for second place. With a podium finish in sight, Ghiotto made light work of his teammate Zhou for fourth place and started to gain on Hubert quickly.

Further back, Championship leader Nicholas Latifi spotted an opportunity to get one over on his title rival Aitken: the Campos driver attempted an overtake on King, but couldn’t hold the position and ran wide allowing Latifi to get past. The DAMS driver went one place further up after he made a move on King.

Hubert was unable to hold off a charging Ghiotto who was soon within DRS range of Ilott. He made an initial attempt on the position going into the penultimate lap, but the Ferrari junior defended gallantly going into the chicane and briefly held him off. The real thing would come a lap later, as Ghiotto’s patience paid off, passing the Briton on the main straight and making it stick going into the first corner.

At the front, a relieved De Vries crossed the finish line first to claim a first victory this season, with Ghiotto in behind and Ilott taking his first ever F2 podium finish, with third place. Zhou breached Hubert for fourth on the final lap and demoted the Frenchman to fifth. Latifi, King, and Aitken completed the top 8.

Latifi remains on top of the Driver’s Championship on 93 points, followed by Ghiotto on 67. De Vries moves up to third on 63 points ahead of Aitken on 62 and Guanyu Zhou on 34.

In the Team’s standings, DAMS top the table with 126 points, 25 points ahead of UNI-Virtuosi Racing. Campos Racing are in third on 74 points, followed by ART Grand Prix on 67 and Sauber Junior Team by Charouz on 32.

Racing will resume on the streets of Monaco in two just under two weeks’ time, when the standings are sure to be given another shake up.