Mercedes: Our upgrades are a step in the right direction 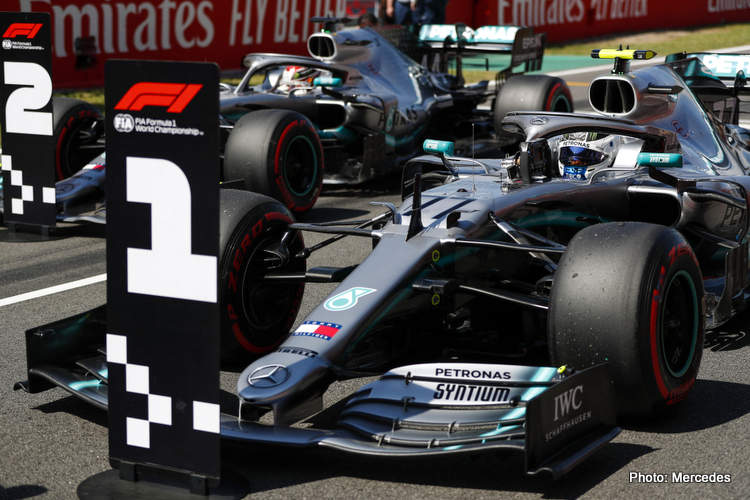 Mercedes report from qualifying for the Spanish Grand Prix, Round 5 of the 2019 Formula 1 World Championship, at Circuit de Barcelona-Catalunya.

Valtteri Bottas: “This feels really good. In every run in Qualifying I found room for improvement, little bits here and there, and I managed to get everything together in Q3 and had a very strong first lap.”

“I think the package we have brought to Barcelona is working very well and the car was very strong, especially in Sector 3. All the credit for that goes to the team, thank you to everyone back in Brackley and Brixworth.”

“Our long run pace looked good on Friday, but a lot can happen on a Sunday. The start and Turn 1 will be particularly important. Tomorrow, Lewis and I both want to win, so I’m looking forward to a hard and fair fight.”

Lewis Hamilton: “I wasn’t quick enough today and wasn’t able to extract the full potential from the car. I have been struggling with the car all weekend, so I will have to look into the details, figure out how I can improve my pace and keep working.”

“Valtteri had a good qualifying session and did a great job, so he deserved pole. Our long-run pace looked good, so hopefully, we should be strong tomorrow as well. My starts have been decent so far this year, so hopefully, that will continue on Sunday as it’s not that easy to overtake on this track.

Toto Wolff: “We’ve brought a number of upgrades to the car this weekend, so it’s good to see that we’ve made a step in the right direction. Valtteri was in good form today and put in a very strong first lap in Q3 and deserves to be on pole.”

“It was a bit of an unfortunate qualifying for Lewis; he couldn’t charge the battery properly because he pitted in Q2 and therefore his first run in Q3 was compromised. None of the drivers improved in their second run, because the track temperature had dropped and there was some dirt on the track as well.”

“It’s good to start the race from the front row as it is difficult to overtake on this track. Our drivers both want to win, so I’m sure we’ll see a fight at the start, but I’m convinced it will be fair.

Andrew Shovlin: “It’s a great result to have taken the front row and encouraging to see such potential in the car. Everyone has been working very hard since the car first turned a wheel to solve some of the issues that we’ve had and it feels like we’re making good progress.”

“The car had good pace this morning but needed a bit of work to adjust to the much cooler track conditions. We were lucky to be able to get back out with Valtteri after his spin but fortunately, there was no damage and he was able to complete the qualifying practice run at the end of the session.”

“Both drivers were quite happy with the balance and we didn’t need to change much going into qualifying. Qualifying wasn’t quite plain sailing. Valtteri had a fairly clean session and put together a stunning lap for pole.”

“Lewis was catching a bit more traffic which made it hard to get a proper feel for the car and to understand how to manage the out lap. He abandoned his final run in the second session due to a yellow flag at Turn 12, which meant the battery pack was not charged ready for the final session.”

“We therefore put him out on track first so he could manage his own out lap, but it meant we caught a number of the cars who left late. By the final run, it seemed that the track had lost a bit of pace and there was some gravel down so few cars were able to improve.”

“We expect it will be hotter tomorrow for the race so managing the tyres won’t be easy but our long runs on Friday seemed strong so hopefully that will carry into the race tomorrow.